tl;dr: A well-crafted documentary about a chef, writer, and TV star who truly knew how to connect with people around the world...

Because truth often is stranger, and more interesting, than fiction, I enjoy a good documentary. Experienced documentarian Morgan Neville’s latest file, Roadrunner: A Film About Anthony Bourdain, should satisfy and please anyone with even a passing interest in learning more about chef, author, and traveling television show host Anthony Bourdain.

A good documentary needs a compelling subject, and the life story of Anthony Bourdain certainly offers plenty of material. I never read his bestseller that propelled him into the spotlight of the entertainment world, Kitchen Confidential: Adventures in the Culinary Underbelly, although I did enjoy occasionally watching his food and culture travelogue show, Parts Unknown. Bourdain is first and foremost a humanist with a strong desire to learn about and connect with people in other cultures. He’s a storyteller and raconteur, who knows how to turn a phrase. On camera, he is articulate and readily conveys emotion with the intonation of his voice. Watching his camera crew follow him around and film footage while he interacted with people, it struck me that there are now many thousands of people filming their lives on YouTube, sometimes with a camera operator in tow, who are trying to achieve what Bourdain did for years on network television. Bourdain did it far better. 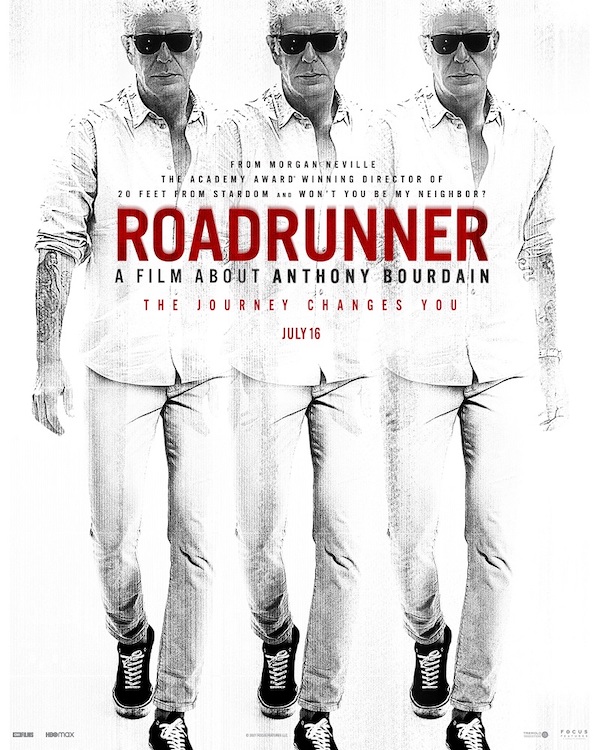 Being a principal in a restaurant is usually an all-consuming job that occupies far more than 40 hours a week. Becoming a world-travelling TV show host required that Bourdain commit to an even crazier lifestyle where he was on the road, and away from his loved ones, for 250 days a year. Roadrunner does examine the impact this lifestyle had on Bourdain, especially his desire to get back on the road after periods of being around his family. Combined with the fame that he achieved, it’s a lifestyle that few who are not celebrities can comprehend. There definitely is a price that Bourdain paid to achieve the success he had.

Roadrunner does probe a bit into Bourdain’s personal life, although most of the focus is on his professional life. Bourdain battled various addictions, which are mentioned at times but, again, are not a primary focus of the film. Roadrunner does try to explain the end of Bourdain’s life and the impact it had on others, although I’m not sure it’s possible to obtain satisfactory answers.

Director Morgan Neville very much knows his craft, as he also demonstrated in the last film of his that I saw, 20 Feet from Stardom. For Roadrunner, he spliced together footage from a huge variety of sources spanning decades. Perhaps he had plenty of time to do so during the COVID-19 pandemic, as the interview footage appears to have been shot pre-pandemic.

Roadrunner is a well-crafted documentary that should satisfy anyone with an interest in learning about the life of Anthony Bourdain, at least as much as can be crammed into a two hour film.