The newest non-animated Disney film, Jungle Cruise, is not destined to become a classic, but families with older children and other Disney buffs should find it to be a pleasantly entertaining experience.

I have been on the Jungle Cruise ride at both Disneyland in California and Disney World in Florida, going back to my first visit as a kid, and I’ve also taken my own family on the ride several times. It’s one of the classic Disney rides, going back to the opening of the first park. It takes up a fair bit of space, as you ride around in a boat through a replica of a portion of the Amazon river in Brazil, with exotic (often fake) plants and animals. Occasionally the animals threaten to attack. At one time, it might have been a scary ride, but today most park goers are not going to be fooled by the old-school robotics animation.

These days the ride is played for laughs, with plenty of puns and campy humor from the boat captain, who keeps up a continuous narration. The ride is faithfully reproduced at the beginning of the Jungle Cruise film, which should bring back sentimental memories for viewers who, like myself, have been on the ride. 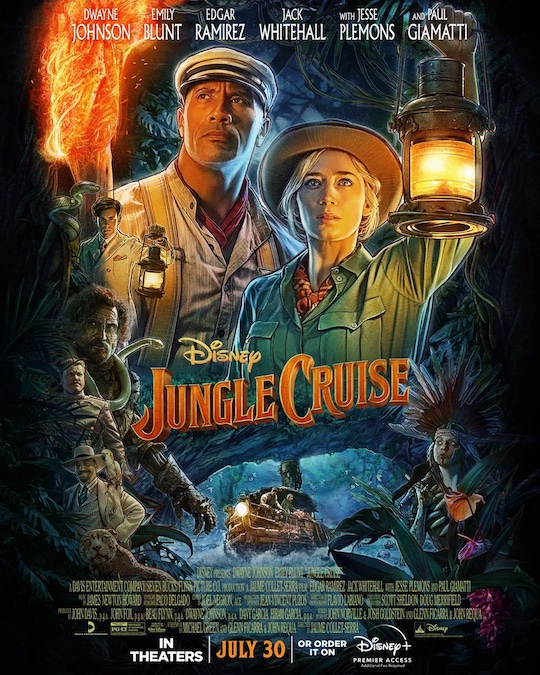 Dwayne Johnson, a.k.a. The Rock, gets a star turn as the captain of the rundown riverboat, and he delivers a superb performance. This may be the perfect role for him, as he gets to be suave and handsome, deliver some funny lines, fight off enemies, and be a hero. He does it all with confidence and a commanding screen presence. Emily Blunt also turns in a fine performance as the female lead, but it's fair to say that this is The Rock’s show.

After recreating the ride itself at the beginning of the film, with many of the same jokes from the ride itself, the script writers were then faced with the challenge of constructing an entire storyline befitting of the setting in the Amazon and the riverboat captain character. The plot they came up with reminded me a lot of Indiana Jones and the Temple of Doom, with a female lead (Emily Blunt’s character) in the role of the academic explorer venturing out into the wilds in pursuit of knowledge. The plot was fine, as it created some tension and excitement, but it would have been much more original if the Indiana Jones series did not already exist. There is also an Indiana Jones ride at Disneyland that I’ve been on, although the vehicle conveying riders on that ride is a Jeep, not a boat. One of the problems with being an older moviegoer, like myself, is that at this point I can often see what films have strongly influenced the creators of the film I am watching.

The film is appropriately rated at PG-13, as some of the fight scenes and scary special effects may be too overwhelming for younger children.