A pandemic of risk aversion

tl;dr: Only the dead can completely avoid the risk of dying...

One of the many things that has surprised me about the COVID-19 pandemic is just how risk-averse many people are. I know that people have a hard time properly judging risks and odds: they are much more likely to fear flying than driving, even though the nation’s skies are much safer than the nation’s roads. Many of the younger people I know seem even more worried about COVID-19 than older people, even though it’s been widely documented since the start of the pandemic that the disease has a much greater impact on older people, especially the elderly.

This risk aversion, however, is very much in line with the general trend over my lifetime. In general, people fear risk more now than they did when I was a kid, and they have modified their behavior accordingly. If I look back to the way that me and my friends behaved as kids and compare it to now, it seems like we were all Evel Knieval daredevil wannabes.

I had a suburban childhood in which I and the other kids in my neighborhood were expected to play together outside without adult supervision. There were no playdates. Our house was my mom’s domain, and she did not want us underfoot. In between meal times we were (sometimes unceremoniously) kicked out of the house and told to go play. She had no idea precisely where we were, so for lunch and dinner and bedtime she would summon us by opening a house door and yelling the names of her children as loudly as she could. Needless to say there were no cell phones, so the only other way of tracking us down would be for her to call the other parents in the neighborhood on the landline phone. Or wait for the police to deliver us to her doorstep.

Today this might be considered child neglect or abuse, but it was standard operating procedure back then in the neighborhood. She could trust that, if other parents saw us misbehaving, they would reprimand us and inform her later. It gave us kids great freedom to explore, decide upon our own activities and games, and for the most part resolve conflicts among ourselves. I think it helped build confidence, interpersonal skills, and what we would today call “self-esteem” (that phrase was not often heard back then). 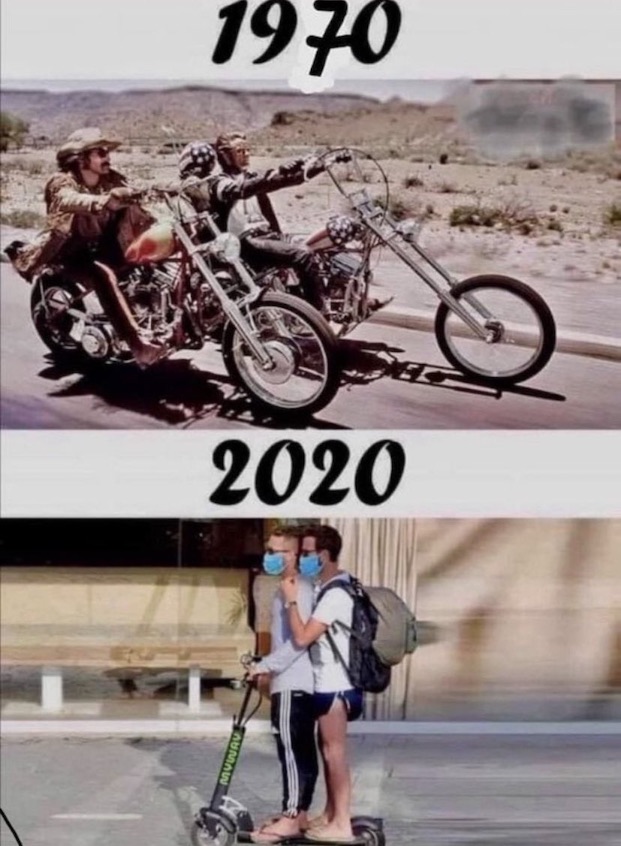 Top image is from the film Easy Rider, bottom image could be any city in the U.S.A. in 2020

We took advantage of the freedom, and occasionally did some dangerous activities with it. Bicycles were the primary conveyance, and we kids used them to venture far outside the neighborhood, either to some woods near our neighborhood or to different parts of the town. No one, aside from racers in the Tour de France, wore a bicycle helmet. Some kids were fortunate to have parents who bought them mini bikes, which, when those kids were older, became dirt bikes, which then became full-fledged motorcycles. ATVs weren’t yet popular, because why would you want a 3- or 4-wheeled vehicle when 2 wheels are more fun? My parents didn’t like motorized bikes, so it wasn’t until I was finishing up my college studies that I acquired a motorcycle. Yes, motorcycles are dangerous, primarily because of the non-motorcyclists (i.e. cars and trucks) sharing the road, as the ending of Easy Rider (the film in the top portion of the picture for this post) illustrates. But they also are incredibly fun, which is why people ride them.

We’d play the occasional game of chicken, by standing in the midst of a road on a blind curve, listening for oncoming cars, and then getting out of the way at the last moment. These days, the quiet electric vehicles on the road would introduce a new layer of challenge to the game. Some kids had BB guns, and would shoot targets and small animals in the woods. Probably the most dangerous thing we did was play on a steel railroad bridge that, because it only had train tracks crossing it, lacked any sort of deck. We’d cross it by carefully walking across I-beams, stepping over the crossing beams, hoping that a train wouldn’t come to interfere with our balance. It was a thrill to make it to the other side. No one ever fell.

I do know some friends and other people in my age group who died, but those tragic outcomes can be traced back to problems caused by drugs, alcohol, or suicide. All three of those issues are still with us today, perhaps to an even greater degree.

The one major area of popular culture that has gotten more risky is extreme sports, perhaps as a counter-reaction to the general trend: risk-averse spectators find it interesting to watch others take risks. There were no X-Games when I was a kid. We had boxing but not UFC. Boxing was too brutal for my tastes, even before the sad spectacle of heavyweight champion Muhammad Ali slowing down in his reaction time and speech. Snowboarding hadn’t yet been invented, so there were no superpipes with 22 foot high walls of ice that snowboarders use as ramps to propel themselves even higher into the air, hoping that they avoid the lip when they come down.

Where does this risk aversion trend ultimately end up? Suppose the medical profession figures out how to stop our bodies from aging, and how to cure all diseases (including COVID-19!), such that we can live forever. The only way to die would be by physically destroying one’s body. What would life be like? It’d be an eternity of boredom, actually. We could sit in a chair all day and read, or watch television, albeit in a well-instrumented home that could detect any possible threat to the structure, such as fire or earthquake. We’d need an army of robots to perform construction and repair, and to go out into the harsh world and bring us our food. There’s no way we would risk getting in an airplane, car, or motorcycle: physical movement would be too risky. We’d pretty much be stuck in our pods. Actually, it would be a lot like life for some of us during the pandemic.