Why I’m not a Bitcoin HODLer, part two

tl;dr: Alternative title: how to recognize when something is in a bubble...

After suffering another short-term crash, the U.S. dollar price of Bitcoin is currently below where it was when I published part one of Why I’m not a Bitcoin HODLer back in April. Now is an opportune time to expand my thoughts on this topic.

Some of this harkens back to what I saw going on around me during the dotcom/Internet/telecom bubble of the late 1990s and early 2000, the first of three major bubbles in my lifetime (we’re currently in the third, which I called a “government-issued debt bubble”). During that first bubble, the dotcom bubble, technology stocks were at valuations that could not be justified by traditional financial metrics. People pumping tech stocks made more and more outrageous claims to justify the current and future valuations of technology stocks. It seemed that every stock was being promoted as “the next Cisco”, for a time the most valuable company on the planet. The only problem was that there was no way for each of more than 100 technology stocks to become the most valuable stock on the planet, and to achieve anything close to the market capitalization of Cisco. The world simply didn’t have that much asset value in it.

Outrageous claims about current and future valuation are now being made about Bitcoin and a new round of technology stocks. Is Tesla really worth more than Volkswagen, Toyota, Nissan, Hyundai, GM, Ford, Honda, Fiat Chrysler, and Peugeot combined? Will Tesla really put all those companies out of business and take over their market shares? For Bitcoin, the most outrageous claims to justify its price in the future are when Bitcoin pumpers claim that it will someday become the reserve asset of governments around the world. 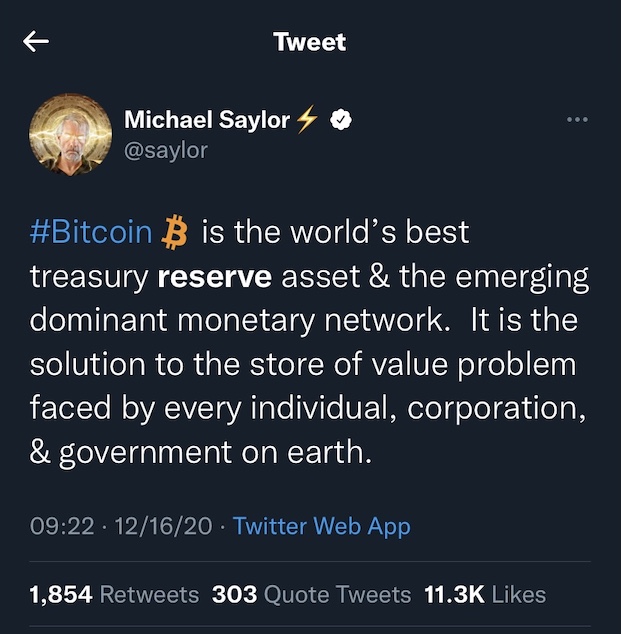 The government of El Salvador has bought some Bitcoin, but it is a small country whose president is willing to take a flyer on riding the hype, at least for the short term. China, the second largest economy in the world, has banned Bitcoin and is amassing other assets, including gold and loans to other countries via its Belt and Road Initiative. The U.S. dollar is the world’s reserve currency, so Bitcoin currently offers no advantages to the United States.

Bitcoin doesn’t have widespread recognition by governments as having value. Bitcoin, being a distributed ledger operated by private entities, is vulnerable to several technical issues that affect its permanence. It may not survive the advent of quantum computers. In the shorter term, it is vulnerable to a 51% attack by a government or any entity with sufficient computing power.

Let’s say Russia decided to use Bitcoin as its sole reserve asset by selling their gold and other currencies and buying Bitcoin. Suppose the U.S. got into a major squabble with Russia and wanted to inflict pain on the Russian government. The U.S. has untold amounts of computing power within the National Security Agency and other government departments. One can imagine a scenario in which the U.S. decides to mount a 51% attack on the Bitcoin network to devalue the Bitcoin held by Russia. Russia knows this, so why would they trust their country’s reserves to the Bitcoin network?

Bitcoiners have an unhealthy fixation on gold and replacing gold as a reserve asset. Gold has a huge advantage relative to Bitcoin as a reserve asset: governments know how to securely store and protect their gold. They are not going to wake up one day and find that something has happened on the Internet which has removed all their gold from their possession. 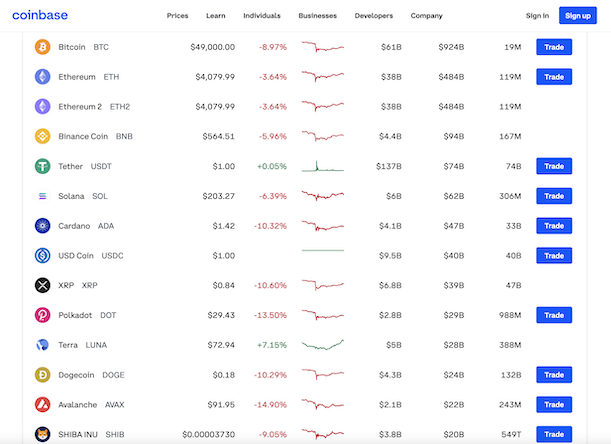 Bitcoin's price has devclined since the April 22, 2021 snapshot in part one of this series

Another unhealthy sign of a bubble in Bitcoin and tech stocks such as Tesla is the constant fixation that HODLers have on the U.S. dollar price. When you hold an asset, what you really have is the asset itself, not an equivalent amount of U.S. dollars. In the case of Bitcoin, what you really have is an entry in a distributed ledger. If you truly believe in the asset, you should be happy to hold it regardless of what its U.S. dollar value is at any moment in time.

The biggest sign, however, that an asset is in a bubble is when the people pushing it have questionable ethics. A negative for Bitcoin is that the number one Bitcoin pumper, and major HODLer, is Michael Saylor of MicroStrategy. A lot of people cheering Saylor on don’t appear to have stumbled across this New York Times article from 2000 entitled MicroStrategy Chairman Accused of Fraud by S.E.C. Saylor ended up paying a $350,000 civil penalty and $8,280,000 in disgorgement, according to the SEC’s litigation release. What did Saylor do that the S.E.C. didn’t like? According to the S.E.C.:

The complaint alleges that from the time of its initial public offering in June 1998 through March 2000, MicroStrategy, a Vienna, Virginia-based software company whose securities are listed on NASDAQ, materially overstated its revenues and earnings from the sales of software and information services contrary to Generally Accepted Accounting Principles. The company's public financial reports during this time showed positive net income. In fact, the Commission alleged, MicroStrategy should have reported net losses from 1997 through the present. 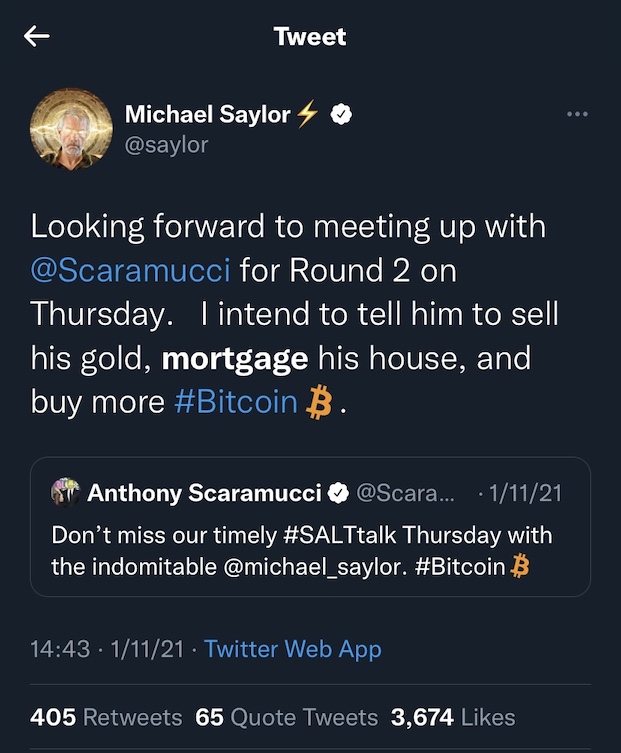 Michael Saylor urging someone to mortgage his house and buy Bitcoin

The S.E.C. regulates securities, and MicroStrategy stock is a security. Bitcoin, for the time being, is not regulated as a security, so Saylor has not yet run afoul of the S.E.C. by overstating the case for Bitcoin. He has been able to get away with broadcasting a statement on Twitter that he is telling someone to “sell his gold, mortgage his house, and buy Bitcoin”. Bubbles attract folks with questionable ethics such as Saylor, like moths to a streetlight. It’s not a good sign for the asset, in the long run. Just look at what happened to MicroStrategy stock after the dotcom bubble burst.