tl;dr: I avoid people who cannot admit they made a mistake...

The annoying phrase “mistakes were made” uses the passive voice to admit that something went wrong without identifying who was responsible for the error. Even worse is when it is clear who is responsible, but that person denies that a mistake was ever made.

Very smart people, especially those with advanced degrees such as PhDs, sometimes have trouble admitting they ever make mistakes. This can become a debilitating character flaw if it happens often and others start to realize that a person has trouble admitting to mistakes. I try to do just the opposite when someone points out an error that either I have made, or a team I am a member of has made: admit the error, apologize, correct it quickly, and try to do better in the future.

I once had a coworker and business partner who, I realized after working with him for a while, always thought he was right and had trouble admitting ever making a mistake. When confronted with a situation in which he clearly was in error, he’d create elaborate verbal justifications for why his views actually were correct. It reminded me of Bill Clinton’s infamous grand jury testimony that “It depends on what the meaning of the word ‘is’ is.”

Another warning sign, which I should have paid more attention to at the time, is that this person was one of the few people I’ve ever met who preferred not to be in a team of people when competing in a quiz game, such as a trivia night. He didn’t believe in the wisdom of crowds: he thought he was smarter than everyone else, and if he were part of a team, the other team members could only cause his correct answers to be rejected by the team. In contrast, I enjoy the interplay of being part of a diverse team: someone with in-depth knowledge, say, of movies and pop music can complement my knowledge of baseball, and collectively we can answer more questions correctly than I ever could by myself.

Examples of refusing to admit mistakes abound in politics and punditry. It seems to be the number one job requirement to become White House press secretary, regardless of the administration, which is why I pay so little attention to these spokespeople. At times their statements seem positively Orwellian. 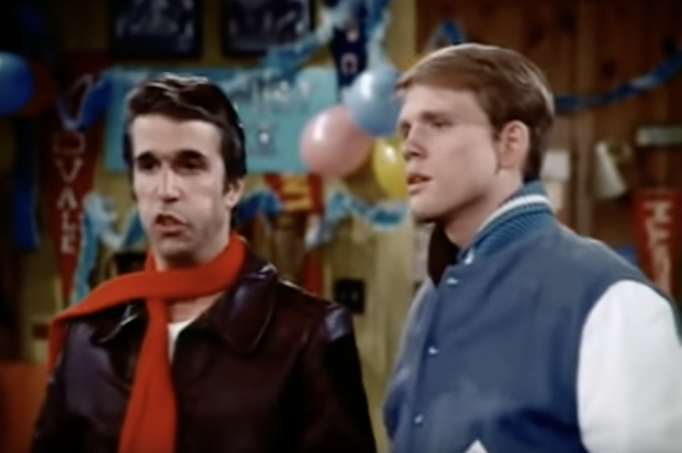 Fonzie, the coolest character on the show Happy Days in the 1970s, also had trouble saying he was wrong

Podcaster Lex Fridman captures a great example of a smart person with a PhD (and MD), Francis Collins, being unable to admit a mistake was made in this interview posted on November 5, 2021. Fridman tries to get Collins, Tony Fauci’s boss for many years when Collins was Director of the National Institutes of Health, to say that Fauci, after reversing his original position early in the COVID-19 endemic that people should not wear masks, should have said he made a mistake or error. “Admit with humility that there’s an error,” is Fridman’s recommendation. Fridman argues that people in the general public would receive new decisions better when they see their leaders admitting errors and then correcting them. Fridman also believes this would decrease the divisiveness in our national discourse.

Collins strongly disagrees that Fauci did anything wrong. Instead he says at the 28:36 mark of the YouTube interview: “Now did he make an error? No. He was making a judgment based on the data that was available at the time.”

Collins’s denial flies in the face of the common definition of an error. It absolves Fauci of any responsibility to make sure that the data are accurate before stating a conclusion based upon those data. It turns Fauci into a mere data processor, who could perhaps be replaced by a computer algorithm which takes in data and spits out a result. It also gives Fauci a permanent “get out of jail free” card for all future errors: just blame it on faulty data or information provided by others. In fact, what people are expecting of Fauci and other experts is that they are vetting data and information to uncover the truth, not just merely adding up numbers in a spreadsheet of data.

Unfortunately for people who refuse to admit to mistakes, it is entirely obvious to others that they are doing so. A refusal to admit a mistake is a refusal to admit the truth, and to substitute authority for truthfulness. It comes across as arrogance, and leads to a loss of respect. In some cases, especially in this era of social media and memes, it can lead to mockery. These outcomes are probably not intended by the person refusing to admit the mistake, which is yet another reason why it is best just to admit to a mistake when called on it.

Why is it so hard for people like Collins and Fauci (or Fonzie, in the TV show Happy Days) to admit to a mistake? Residing at the pinnacle of the nation’s public health system (or, in Fonzie’s case, the pinnacle of his peer group’s social hierarchy), they probably believe they reached their positions of authority by being nearer to perfection in their statements and actions than any of their peers. To admit an error, in their minds, would be to admit that perhaps they don’t belong there, and that someone else does. Personally, I would much prefer someone at the top who can admit when a mistake was made. I’ve learned to avoid dealing with people who cannot admit to making a mistake.