tl;dr: Great to see Branford and his exemplary sidemen back on the road...

The COVID-19 endemic dealt a severe blow to the performing arts by darkening venues for many months, and making it hard for performing artists to make a living. It also, sadly, claimed the life of Branford Marsalis’s 85 year-old father, New Orleans jazz patriarch Ellis Marsalis, Jr. Branford eventually summoned the strength to return to the road, even traveling internationally at a time of great uncertainty, which led to some epic Twitter posts about the difficulties posed by airline mask policies. The world is a better place when Branford and his exemplary sidemen are on the road, sharing their musical genius with us mere mortals.

I had seen the Branford Marsalis Quartet perform in the same venue, the Virginia G. Piper Theater at the Scottsdale Center for the Performing Arts, before the onset of the endemic. At that performance, the quartet nearly blew the roof off the modern theater, with a rousing performance that was gleefully applauded by the crowd. In between songs Branford chatted with the audience, talking about the fun had had golfing in Scottsdale in the winter and the ups and downs of his beloved New Orleans sports teams: the New Orleans Saints football team had just been eliminated from the NFL playoffs by the “worst no call in NFL history,” according to some. 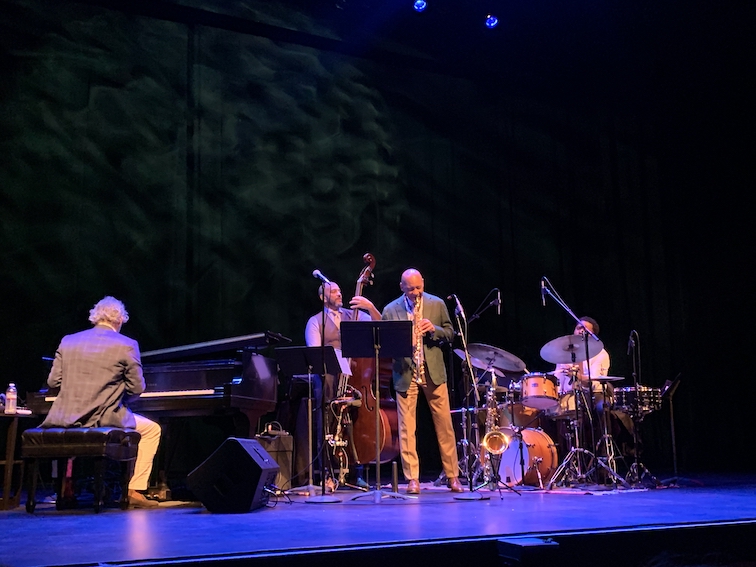 In this 2021 appearance, Branford, his quartet, and the audience were more restrained. The quartet was as proficient as always: each of the four players is simply one of the best at his instrument in the jazz profession, and they have been together long enough to interplay seamlessly. If you want to see a jazz quartet performing at the very pinnacle of that musical genre, go see the Branford Marsalis Quartet. The group interacted among themselves more than with the audience; hopefully that will change in the future as the performing arts scene gets back to whatever the “new normal” will be.

The evening closed on a touching note, as Branford paid tribute to local Phoenix jazz drummer legend Lewis Nash, the namesake of The Nash jazz venue. According to Branford, he and Nash crossed paths and played together decades ago in New York City; each has gone on to become influential in the jazz music scene both internationally and in their hometowns. Branford’s drummer turned over the drum set to Nash for the quartet’s final song of the evening. The moment was clearly special to Branford, who is someone who never forgets where he came from and the people he met along the way; that humanity is one aspect of what makes him a great jazz artist.