The easiest black trail at Steamboat

tl;dr: The article I wish I had read before I tried my first black trail at Steamboat...

You’ve built up some confidence by skiing the harder blue trails such as Vagabond and Buddy’s Run, and you think you’re ready to try your first black trail at Steamboat. Head to the top of Thunderhead, either via the gondola or Thunderhead Express, start down Heavenly Days, pass Oops on your right, then come to a stop at the next right, which is a short black trail called “Ted’s Ridge”.

Oops, which you passed, is steeper than Ted’s Ridge, and fills up with moguls. So does (Upper) Concentration, which you’ve seen from the Thunderhead Express lift. Vertigo, which starts further down Heavenly Days, is often ungroomed and allowed to accumulate the deep champagne powder for which Steamboat is renowned. I once skied Vertigo early in the season, when the trail had just been opened and few had been down it. I missed a turn and ended up swimming in powder, trying to find a buried ski that had detached from my binding. You won’t have problems like that on Ted’s Ridge, which Steamboat keeps well-groomed.

You probably won’t have too much company, which means fewer moving obstacles and fewer eyes watching you. Ted’s Ridge is a fairly wide trail for a black at Steamboat; depending on traffic, if you’re lucky, you may be able to use the entire width. Even if you have to ski to one side, you should still have plenty of space to make your turns. 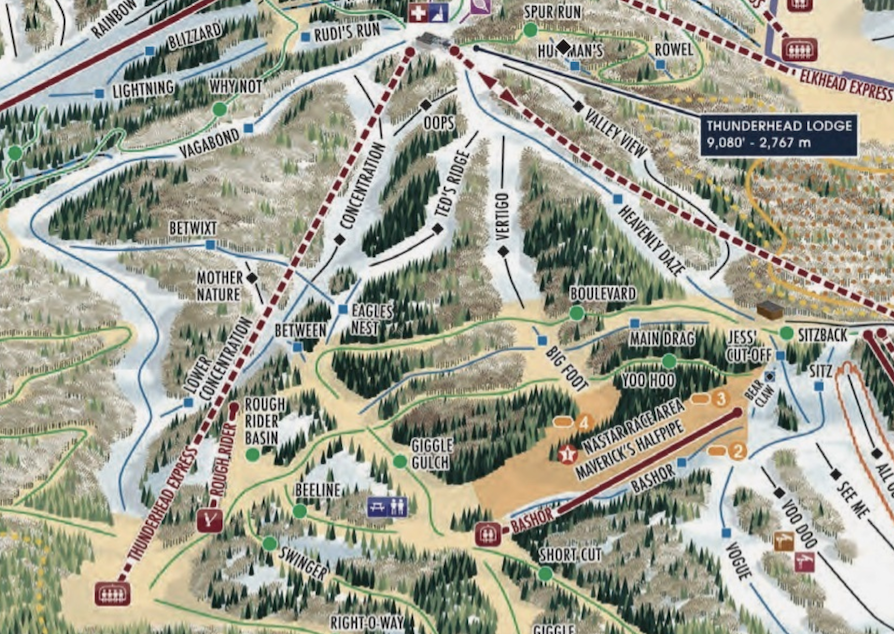 Once you build up the courage to drop in, you’ll be beyond the view of the gondola passengers and the much heavier traffic on Heavenly Days. The steepest, most challenging part of Ted’s Ridge is at the beginning, but it is not as steep as other blacks such as See Me and Rolex. Depending on the time of day there may be the very beginnings of moguls, but there should be enough loose snow to make a turn wherever you feel the need to do so. I’ve never seen Ted’s Ridge scraped down to hard pack with the loose snow pushed to the side of the trail; it doesn’t attract enough skier traffic for that to happen.

As you work your way further down, rest assured that it gets easier. In fact the lower portion of the trail is classified as a blue and is named “Eagles Nest”. It functions as a runout: once the slope seems reasonable, you can stop your speed-killing turns and go fast. Be careful not to pick up too much speed, because you’ll soon be in the land of greens, with novice skiers. Stay right to pick up the Thunderhead Express lift if you want to do it all over again. If you do, note that you’ll be on blues most of the way (Heavenly Days and Eagles Nest), with greens at the bottom, and just the one stretch of black on Ted’s Ridge.

That’s the most gentle introduction possible to skiing a black trail at Steamboat. I would specifically advise you to avoid making See Me your first black. Between the steepness and the full exposure to the entire base area, you’re better off sipping a drink from the bottom and watching others make fools of themselves by crashing their way down See Me.

Judge how you are skiing blue trails by comparing how often you are turning with the predominant patterns carved into the snow by other skiers. If you are turning more often than most of the other skiers, you are not yet as good a skier as the average skier on a blue trail. If, however, you are pointed more down the hill, and are turning less often than the patterns carved by other skiers, then you are progressing beyond being an intermediate (blue) skier, and are likely ready for more challenging terrain. Steamboat has some blue-black trails (I recommend Two O’Clock, Sunset, and Longhorn) where you can work up the courage to try Ted’s Ridge. Your first time down Ted’s Ridge, you will definitely be making many more turns than the average Steamboat black trail skier.

Where to go after you try Ted’s Ridge

West Side and Storm Peak South are the next ones I recommend trying. After that, the other blacks have even greater challenges: some combination of steepness, moguls, narrow trail width (especially the blacks off the Pony Express lift), trees, possibly deep ungroomed powder, and sheer length (Three O’Clock). Remember that the trail coding system at each resort is different. Steamboat has sent many skiers and snowboarders to the Olympics, so if you can ski a black trail at Steamboat and live to tell about it, you’re a pretty good skier.