tl;dr: It’s debatable whether we’re in an overall recession right now, but we’re definitely in a productivity recession...

Economists, investors, businesspeople, politicians, and consumers are fiercely debating whether the United States is already in a recession, headed towards a recession, or will avoid one entirely. Real (inflation-adjusted) Gross Domestic Product (GDP) fell in the first quarter of 2022, and the latest projections from the Atlanta Fed show another decline in the second quarter of 2022. The headline unemployment rate, however, remains low at 3.6%, and the count of employed people is growing. Two consecutive quarters of real GDP decline is one rough rule-of-thumb definition of a recession, yet employment usually falls during a recession. The official declaration is made only with the benefit of hindsight, often well after the recession ends, by the National Bureau of Economic Research (NBER).

What is going on? If you believe both the GDP numbers and the job numbers, output is declining and it is taking more workers to produce that smaller output. This points to a significant decline in productivity. We may not yet have what the NBER would classify as a recession, but we definitely have a productivity recession.

I cast a wary eye at the GDP numbers, especially during periods of high inflation like we have now, with the latest annual consumer price index increase measuring 9.1%. You can’t directly measure real GDP. Instead, you have to measure nominal GDP, the dollar value of goods and services sold, and then derate it by something called the GDP deflator, which is basically a measure of price inflation. If the total dollar value of goods and services sold grows 8% year-over-year, but the GDP deflator is 9% because of inflation, then real GDP shrinks by 1%. Change the GDP deflator to 7% and real GDP grows by 1%. It is very hard to come up with an accurate GDP deflator, or measure of inflation, which is one of the reasons why there are so many of them. 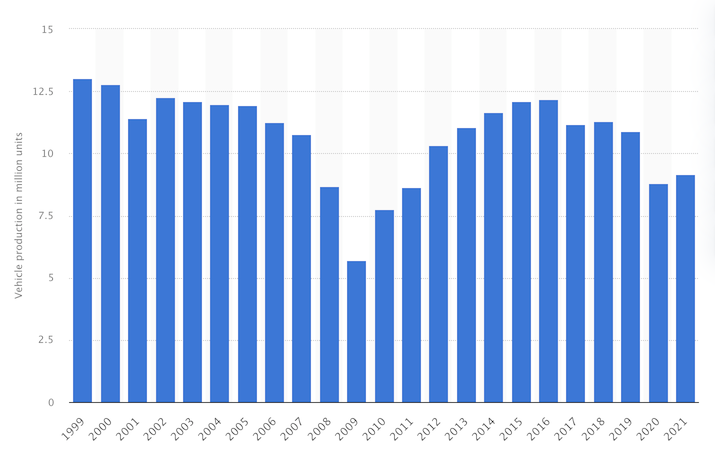 Count of motor vehicles (millions) manufactured in the United States by year, for the years 1999 through 2021. Source.

I prefer counts as a measure of economic activity: number of houses built, number of cars built, number of flights and passengers flown, number of students educated. If you look at the counts, across a broad range of industries, you will see that most industries are not yet producing at the level they were before the COVID-19 endemic. To cite just a few examples: a Wall Street Journal article this week titled Broke Colleges Resort to Mergers for Survival stated that college enrollment has declined from 17.5 million in the spring of 2019 to 16.2 million in the spring of 2022. There’s no data on employee counts, but the article is about colleges which are closing or being merged. Delta Airlines provided information about both output and jobs: they stated that their “active headcount is at 95% of 2019 levels, despite restoring less than 85% of...capacity”. Delta’s situation, writ large, is what appears to be flummoxing observers of the U.S. economy: it is taking more workers to produce less output. 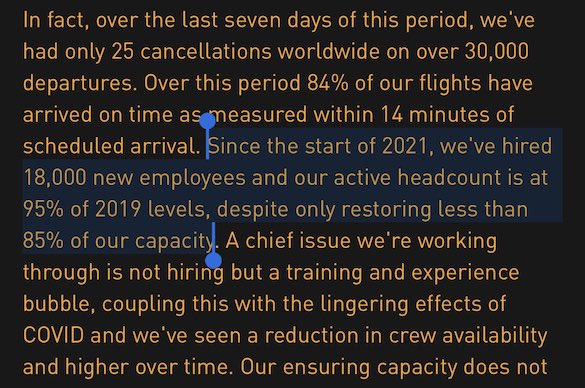 Delta Airlines says they are less productive than before the COVID-19 endemic. Source.

Yet if you consider the impacts of the COVID-19 endemic and all the government and business responses to it, I think it makes sense. There are many reasons to expect lower productivity:

The COVID-19 endemic has had a major impact on the workforces of almost every industry. My next-door neighbor is one of the many experienced airline industry professionals who quit rather than deal with all the uncertainty, the new work rules, and unruly passengers. There’s been much higher-than-normal turnover in many businesses. The loss of experienced workers who know an organization’s systems, and the need to train newly hired workers, makes everyone less productive.

What do companies that manufacture products do when they experience supply chain issues? They madly search for alternative suppliers, which takes more time than just re-ordering from existing suppliers. The engineers spend time qualifying new parts from new suppliers and adapting for close substitutes, instead of the product being built on autopilot while the engineers design the next great product. Products get built as much as they can be, minus the parts in short supply, and stored in the hopes of finishing the assembly when the missing parts arrive; this is less efficient. Fewer products get built, and it takes more worker-hours to build them.

When major changes are made to supply chains, such as reshoring work formerly done in China, there’s a huge amount of work that goes into setting up a new assembly line in a new location. It’s possible to make some efficiency improvements when the new, hopefully better line is set up, but the short-term impact is a loss of production.

This varies by industry and jurisdiction, but has affected many, especially those that interface with the general public. Workers who have to spend time putting on protective gear, cleaning work areas, and who can’t work as closely as normal with each other and the general public, are less efficient. When customers have to make an appointment to get service, instead of just dropping by, and those appointments are limited, less output is produced.

Work-from-home in industries not well-suited for it

I would argue that the industry I’m in, Internet software development, is well-suited to work-from-home, and that we’ve lost very little productivity and perhaps gained some by avoiding commuting. On the other end of the spectrum are industries such as childhood education: hastily arranged Zoom classes, more people now realize, are a poor substitute for in-person classes, if you measure output by measuring student performance. Although venture capital firm A16Z announced this week that they are moving their headquarters to the cloud, not every industry can or should do this.

I don’t think there is any doubt that we are currently in a productivity recession.