Book review: Escape from Camp 14: One Man's Remarkable Odyssey from North Korea to Freedom in the West, by Blaine Harden

For those who may think that concentration camps disappeared from the face of the earth when the Allies triumphed over Nazi Germany, there is a book you should read: Escape from Camp 14, by Blaine Harden. In fact, this is a book every high school student and citizen of the free world should read, to understand one of the key means by which the Kim regime in North Korea maintains its control over the population. It is a story that will elicit shock, disgust and outrage, but it is a story that should be told to as many as possible. 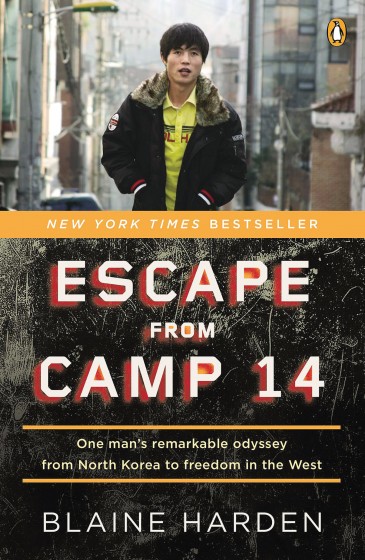 Escape from Camp 14 chronicles the life of a young man born into a family imprisoned in one of North Korea’s most dire, brutal concentration camps, where multi-generational families are held due to the crimes against the regime committed by an ancestor. North Korea is a very poor country to begin with and the conditions in the camp are extremely primitive, with rats caught by the prisoners often the only source of meat. Prisoners are routinely brutalized and worked to death, and are basically treated worse than pack animals since the guards incent them to spy and snitch on each other. As a result, those born into the camp never learn nor develop the basic tenets of humanity. When the subject of the book manages against very long odds to escape from the camp and the country, he has an exceedingly difficult time adjusting to life in the free world.

Blaine Harden writes in a straightforward style befitting his profession as a newspaper journalist. The vocabulary is none too extensive, the story is easy to follow, and it is presented in chronological sequence. As a result it should be accessible to high school or even advanced junior high students. I would have preferred a more in-depth, detailed version of the story, which is the main reason I withheld a star from my rating. But I suspect Blaine Harden wanted to make this story accessible to as many people as possible, in which case he succeeded admirably.

Complex geopolitical realities prevent the nations of the free world from marching into Pyongyang to overthrow the Kim regime and free the prisoners of Camp 14 and other camps. Meanwhile, the suffering and dying in the camps continues. Escape from Camp 14 is a book which reminds each one of us that state-sponsored evil still exists in the world, and that we must find a way to bring it to an end.