Book review: Clash of Civilizations Over an Elevator in Piazza Vittorio, by Amara Lakhous, trans. by Ann Goldstein

tl;dr: How much truth is there in this immigrant story?...

Amara Lakhous’ Clash of Civilizations Over an Elevator in Piazza Vittorio (translated by Ann Goldstein) is an enjoyable short novel, but I can’t praise it nearly as much as the many reviewers, both in Italy and the States, who have heaped accolades upon it. I suppose the major problem I have with it is one I cannot answer myself: how accurately does it reflect the experiences and feelings of citizens in present-day multicultural Rome and Italy? Is it at all exaggerated even beyond the norms of behavior that one would expect from the more emotionally expressive Italian people? I suspect it is, in which case Lakhous may be propagating stereotypes, but have no way of knowing for certain. 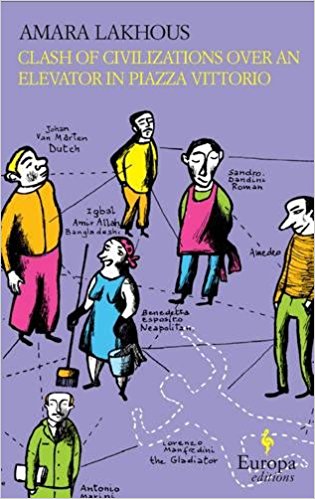 The other minor problem I have with the book is the ending, in which the first person recollections of the main character veer off into the abstract. Perhaps this is intentional and inspired by Italian cinema artists such as Fellini, but as with a Fellini movie it had me scratching my head and asking myself “what the heck just really happened”?

For readers in the United States, a nation of immigrants with many well-documented struggles over the centuries, it is enlightening to read of the immigration challenges of another nation. The north versus south differences within Italy described by Lakhous also have obvious parallels with the U.S. The immigrant story is a universal one, and Lakhous does a masterful job showing how differences in belief systems and cultural values, compounded by communication problems, produce conflict. The question of assimilation versus maintaining one’s cultural heritage in a new land is also explored and yet not answered by the author. As a result Clash of Civilizations would be a fine choice for a book group to debate.

Ann Goldstein’s translation solid and easy to read. Lakhous not only uses wordplay on occasion but several important events in the book hinge on the slight differences in pronunciation, spelling and meaning between words in different languages. This likely presented Goldstein with a translation challenge, but she found a way to make it work.