Any attempt to describe John Barth’s Giles Goat-Boy (GGB) is going to oversimplify what is a vast, complex masterpiece of a book. Nevertheless, here goes: GGB is a treatise on philosophy, religion, ethics and the nature of truth and knowledge, seen through the lens of Cold War politics where all aspects of geography and society are transposed into a university setting, as experienced by a young man raised as a goat who is coming of age. It sounds impossible, but instead it is brilliant. 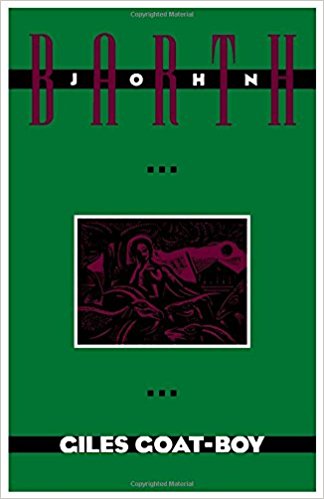 Philosophy and religion are at the very core of GGB. Through the interactions of various characters and references to thinly-disguised historical figures, Barth explores many of the key questions that have occupied deep thinkers for centuries, as far back as ancient Greece. In GGB Barth even rewrites the play Oedipus Rex in a manner that entirely appropriate for its new setting in the novel. But if Barth were to restrict his focus to just religion, philosophy and ancient Greek classics, he would likely have produced a very dry tome. Instead, Barth weaves in storylines concerning Cold War politics and campus life which should be intimately familiar to anyone who attended college in the past fifty years. Then he creates a fascinating protagonist, the title character, and sends him on an epic quest filled with battles, conquests and lustful pursuit. Finally, at all times, Barth’s highly developed and observant sense of humor shines through, providing further impetus for the reader to keep turning the pages.

As is true with Barth’s other lengthy tomes (e.g. The Sot Weed Factor), Giles Goat-Boy rewards attentive reading, ideally in closely-spaced long sittings, so that the reader reaches the conclusion without having forgotten too much of the beginning. The title character in GGB retraces the same settings and revisits the same secondary characters multiple times, so it helps to be able to remember what happened previously. If one wants to go deeper, GGB is the rare novel that would yield further insights upon multiple consecutive readings along with careful notes, diagrams and cross references. But one does not have to put forth that much time and energy to appreciate Barth’s masterful writing: his use of extensive vocabulary, his invention of words and names, his alliterations, his exclamations, his apropos quotes and phrases from other languages, and most of all his satirical humor, often self-deprecating.

For additional critique of GGB, one has to look no further than the beginning of the volume itself, as it begins with what purports to be four different editors’ reactions to reading the manuscript before publication. It’s not often that a writer reviews his own work from four different viewpoints, but as with the main body of the work itself, Barth manages to pull it off expertly.

Certainly there is much in GGB that could offend sensitive readers. Barth not only does not shy away from the profane, the licentious, the perverse and the blasphemous. Rather he purposefully uses these as techniques to convey his ideas with maximum emotional impact. Other readers may be put off by the sheer length of GGB. But for a reader who approaches GGB with an open, learned mind and enough time and concentration, Giles Goat-Boy is an enjoyable, deeply satisfying, mind-opening read.