John Barth's third book, The Sot-Weed Factor, is an epic in nearly every sense of the word including the poetic. As Barth is wont to do, The Sot-Weed Factor is not only the title of this book, but it is also the title of a poem in the book which is penned by the lead character, who is himself a sot-weed factor ("sot weed" being a slang term for tobacco, and a "factor" being an agent, middleman or dealer). Thus Barth has described three different things with the same four words: this provides a hint of the many layers of meaning contained within The Sot-Weed Factor (Barth's book, that is, henceforth TSWF). 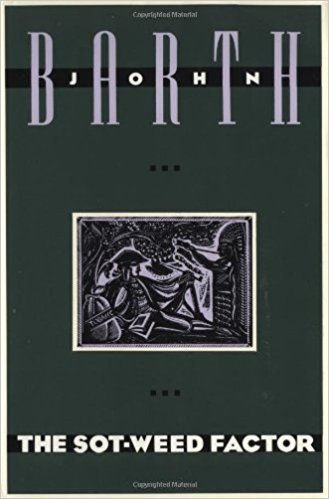 TSWF rewards careful reading and rereading, and like most masterpieces it can be read and interpreted in myriad different ways. It can be read and admired simply for the literary achievement of penning, in the mid twentieth century, a lengthy book with a fair bit of poetry in it completely in the vocabulary and style of eighteenth century educated British society. TSWF can be read as an entertaining, bawdy satire; as historical fiction that may or may not illustrate something about aspects of American colonial life not often captured in textbooks; and as an intricate puzzle or game with intertwined characters that is not resolved until the end.

But, as today's infomercials say, that is not all! Things get especially interesting when one interprets TSWF and draws parallels to the modern world. At its core TSWF is a story about the loss of innocence, with one person's innocence perhaps standing in for an entire country's or people's. The good news is that this loss of innocence may not be all that bad a thing. There are many philosophical, religious, political and legal aspects of the storyline, and Barth explores these deep issues while consistently keeping the reader entertained. Barth appears to advocate secular humanism, and one of the many interesting aspects of TSWF is to see how these principles would be carried out in the much more rigid society of British Colonial America.

I heartily recommend TSWF to anyone with a sense of humor who appreciates finely written literature, and who has the time to devote to a lengthy written masterpiece. Although I think Barth could have done a bit of trimming, there is plenty of action and humor to keep the reader's interest. Upon completing TSWF I felt satisfied, and am looking forward to reading more of Barth's works and perhaps someday rereading The Sot-Weed Factor.