Book review: An Army at Dawn: The War in North Africa, 1942-1943, Volume One of the Liberation Trilogy, by Rick Atkinson

tl;dr: The American perspective on the liberation of North Africa...

Rick Atkinson's An Army at Dawn (AAAD) is an account that, from a strongly American perspective, describes how the U.S. contributed to the successful expulsion of the Axis forces from North Africa, the first stage in the Allied liberation of Europe in World War II. AAAD is the first of a planned trilogy, with forthcoming books focusing on Italy and then the drive across France to Berlin. 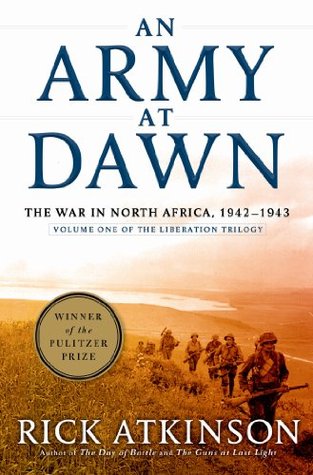 Atkinson, a journalist, restrains himself from too many editorial comments, focusing instead on a straightforward description of the facts of the various battles and strategies. His main indulgence is a propensity to point out the flaws in almost every battle plan, which (if he is correct) produced many unnecessary casualties. One of the main strengths of AAAD is that Atkinson looks at the war from all levels, from FDR & Churchill puffing on their smokes and pontificating after a four course dinner served on fine linen and china, to the sleep deprived shell-shocked infantryman on the front lines. Atkinson's heart lies with the soldier in the trenches, which is a completely reasonable place to put his sympathies.

I most enjoyed the various war strategy discussions, especially FDR & Churchill's momentous Casablanca Conference. The strains experienced by the alliance, and the challenges of winning over the German-controlled Vichy French, who initially (and in some cases very bloodthirstily) fought the U.S. and U.K. armies who were trying to liberate them, were enlightening and have direct parallels in current world events. There are many lessons from AAAD that can be applied not only to current events, but also to the world of business: the challenges of getting people from different cultures to form cohesive teams, the importance of clear communication, the need to focus and concentrate one's forces, and the motivation required to get people to make huge sacrifices to achieve a goal. My main complaint about AAAD is that I felt Atkinson spent a little too much time providing a blow-by-blow account of various battles and precisely how various hills were attacked: this made the book somewhat slow going, and detracted from the other more important issues in the book.

I'm not at all familiar with the vast trove of World War II histories (an extensive bibliography is provided, and Atkinson does appear to have done exhaustive research, and quotes at length from soldier's diaries and letters), but I would say AAAD is deserving of the Pulitzer Prize for history. World War II is a monumentally important event in U.S. history, and AAAD deserves to be read by American citizens seeking an understanding of how our country contributed to the liberation of Europe, and just what was required to do so. As Atkinson says, it arguably is the greatest story of the 20th century.