Published shortly after the 2005 White Sox won it all, how does Say It’s So hold up nearly a decade later? Reading it in 2014 I found that it brought back many pleasant memories of the White Sox’ near perfect run through the 2005 postseason. It captured most of the highlights and added a few stories that I hadn’t heard before or had long forgotten. But the positive feelings the book left me with were due more to my own recollected feelings of that amazing time, and not so much due to the excellence of author Phil Rogers’ prose or the thoroughness of his research. Say It’s So is an enjoyable book for White Sox fans, but the definitive volume of the 2005 White Sox team is yet to be written. 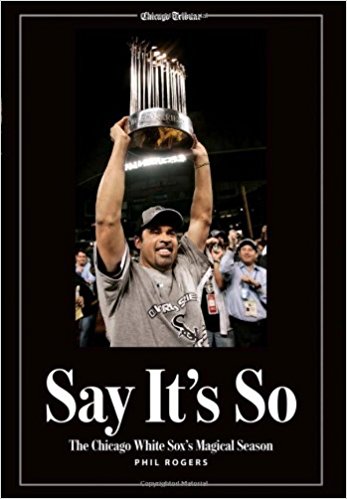 Most of the book is a game-by-game account of each of the twelve playoff games, of which the White Sox won eleven. Rogers does sprinkle in stories about each of the team’s main players and management, but these tend to be brief snapshots intended to capture a certain element of a person’s character. There are a few attempts to explain how the players were assembled to form a World Series-winning team, but nothing too in-depth. Long suffering White Sox fans are briefly mentioned at times, but the focus of the book remains on the field and especially on the events of the twelve playoff games.

Richard Roeper wrote a much more poignant book from a fan’s perspective, Sox and the City, that conveys what the 2005 White Sox team meant to their championship-starved fan base. There is still a need, I believe, for a book on the 2005 White Sox that focuses on the team and explains in-depth how it came together and what it did on and off the field to bring Chicago its first World Series championship in 88 years. Perhaps someday soon, now that most of the players are beyond their playing days and able to put the events of 2005 in perspective, that book will be written.