The selections in any particular volume of the “Best American” anthology series almost always bear the imprint of the guest editor, and 2013’s essay volume is no exception. As guest editor Cheryl Strayed explains in her introduction, she was profoundly affected by the premature loss of her mother and focused her early writing solely on that topic. While that same topic appears in this volume, more generally the stories that Strayed has selected reflect the pain and suffering that the essay authors endured, and their reactions to life’s varied tragedies. 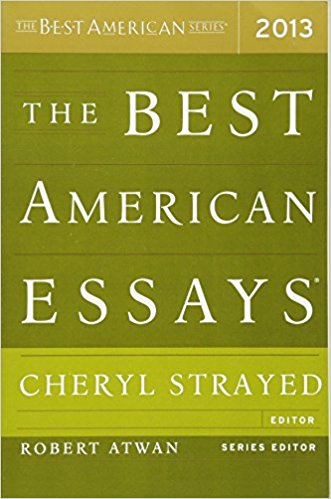 So when you read this volume, don’t expect ruminations on the beauty of the world around us. The essays that Strayed has selected are, for the most part, impactful to the reader, due both to their subject matter and the quality of the writing. However, focusing a collection of essays on loss and suffering limits the creative possibilities of the essays contained within. The essays in this volume tend towards harsh realism, and a lot of their power comes from the events themselves, not necessarily the creativity of the authors in describing those events.

There is only one essay that I felt pushes the creative boundaries of the essay form: J.D. Daniels’ “Letter from Majorca”. Even the events it describes, in impressionistic ways, are to be avoided if one can. But Daniels manages to expertly convey his feelings as he goes through various tribulations without resorting to a blow-by-blow account. The result is like a jazz riff on a familiar melody, in which the musicians only occasionally return to playing a few notes from song’s structure: the listener (or in the case of Daniels’ essay, the reader) can for the most part figure out what is going on, but what is conveyed most prominently is what the musician (author) is feeling at that point in time.

The other essays that I enjoyed the most are:

“Pigeons”, by Eileen Pollack: Adults who were once smart, precocious youngsters who felt as though they didn’t quite fit into the structure of the American public school system will identify with the events and frustrations that Pollack describes.

“The Book of Knowledge”, by Steven Harvey: This essay deals with a variation of the same trauma that Strayed suffered, the loss of a parent. But it is also a portrait of a marriage and a behind-the-facade view of the American family during what many view as an idyllic time of American ascendancy, the 1950s.

There was one dud essay in the volume: Kevin Sampsell’s “I’m Jumping Off the Bridge”, which, due to the simplistic writing style and the events it describes, caused me to wonder whether the author truly is a professional writer (he is, evidently). There were a couple of other misfires: Ander Monson’s “The Exhibit Will Be So Marked” and Vicki Weigi Yang’s “Field Notes on Hair”. But the rest of the essays were worth reading, in my opinion.

I do recommend the 2013 volume of The Best American Essays, but not as highly as I’ve recommended previous volumes in the series. Learning from others’ hard times can be worthwhile.