Book review: The Big Short: Inside the Doomsday Machine, by Michael Lewis

tl;dr: The bursting of the housing bubble, from the perspective of those who foresaw it...

The Big Short (TBS) is not an exhaustive history of the bursting of the housing bubble, although it does contain descriptions of many of the key events and underlying causes. Rather, it is primarily a profile of some rather eccentric individuals, outside the mainstream of the U.S. financial industry, who not only correctly diagnosed the flawed mortgage finance system, but who made fortunes by finding ways to bet on its ultimate failure and collapse. In financial industry parlance these individuals are called "shorts", and "the big short" is a large bet placed on the ultimate failure of something, in this case the U.S. sub-prime mortgage market in the mid-2000s. 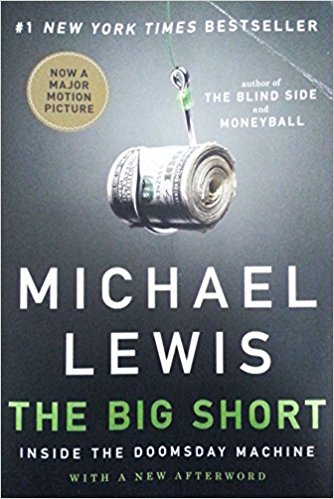 To make a fortune by placing a short bet, you almost by necessity have to be an iconoclast operating well outside the mainstream, as you have to place your bet when times are good and the cost of a short position (for example, flood insurance) is minimal because no one else believes bad times will come (as opposed to buying flood insurance hours before a hurricane is due to make landfall). And sure enough, the shorts portrayed in TBS are far from your typical Wall Street brokerage firm employee. Several of them have deep-seated psychological issues that stem from bad things that happened to them earlier in life. These unfortunate events cause them to have a more pessimistic view of the world and also to feel as though they do not fit in with their peers and society as a whole.

The contrast that author Michael Lewis draws between the shorts and folks in the mainstream of the U.S. financial industry during the good times is striking. The shorts absolutely believe the sub-prime mortgage industry is a house of cards, and yet they are ignored, shunned or vociferously criticized for their views. Meanwhile, the amount of money flowing to the individuals and firms in the mainstream who are building and expanding the house of cards is staggering. Everyone except the shorts is patting themselves on the back and cashing large checks, and yet the entire financial structure that they have erected is flawed and about to collapse.

Michael Lewis started his professional career on Wall Street, and casts an appropriately critical eye on its dealings and its pay structures. The shorts portrayed in TBS ultimately did very well for themselves, but so did far too many of the people who built the house of cards. That money can never be recovered, and it ultimately represents a gross misallocation of capital, with future U.S. taxpayers footing much of the bill. As Michael Lewis shows in TBS, the U.S. government, through its explicit policies to encourage the growth of the sub-prime mortgage industry, and Wall Street, which figured out how to profit from its growth, conspired together to inflate the housing bubble, and in that sense share the blame. The portrayal of the shorts in TBS shows just what it takes to be one of the early voices telling the emperor that he has no clothes.