Book review: Veeck - As in Wreck, by Bill Veeck

tl;dr: Still one of the best baseball books ever written, nearly 50 years later...

If you are at all interested in the history of major league baseball, then Veeck - As in Wreck belongs on your top ten list of must-read books about the game. 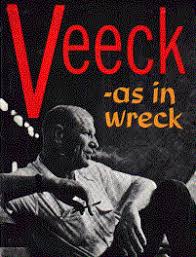 For those who don't know Bill Veeck, he is a man the likes of whom we probably will never see again in the sport: a baseball man from birth, who grew up at Wrigley Field and later fronted management groups which owned four teams: the Milwaukee Brewers (when they were a minor league franchise), the Cleveland Indians, the St. Louis Browns (the current Baltimore Orioles), and the Chicago White Sox. Unlike today's owners, Veeck did not come into wealth through a non-baseball business; in fact, he didn't really come into wealth at all. He was a classic hustler (in the good sense of the term), who put together club buyout deals consisting of mostly of hope, promises and borrowed money.

Once Veeck owned a franchise, he ran it in the most fan-friendly way possible: he spruced up the ballpark, put his deal making skills to work assembling a team of the best players he could afford, and tried every promotion and attraction he and his cohorts could think of (including, most famously, a midget at bat) to fill the stands. Given that all the other major league teams at the time were owned by bluebood families who valued tradition and the status quo, Veeck was of necessity cast in the role of maverick. While he often had to battle the powers that be that ran baseball and the other teams, he found his rewards in the stands among the people whom he loved and who, for the most part, loved him back, especially when he brought the World Series to Cleveland and the south side of Chicago.

Veeck - As in Wreck has multiple qualities that make it a must-read for baseball fans. First and foremost it is the autobiography of a very interesting man who accomplished much and overcame some serious adversity (health problems and lack of money) to do so. Veeck shows how much can be accomplished if you keep a positive attitude and keep thinking and trying. His love for the common folk and people comes through strong, and not only contributed to his business success but also made him a genuinely happy person.

But baseball fans will most relish the inside look Veeck provides of the baseball world in the mid 20th century. Veeck was an innovator, a visionary, and an instigator of change, whom history has proven to be right on many issues: westward expansion and major league expansion, interleague play, the loss of independence of the minor leagues, the oversized influence wielded by the Yankees because of their immense bankroll, and various changes to the fan experience, many of which were pioneered by Veeck. Major league baseball often resisted Veeck and conspired against him, but in the end usually did what he was advocating (such as putting a major league team in Milwaukee, moving the St. Louis Browns to Baltimore, and putting a team in Los Angeles to name just a few).

Veeck - As in Wreck is written in an easy-to-read conversational style. Veeck loved talking with people, and the book reads as if Veeck is telling stories to his friends and admirers over a beer or two. Because of the impact that Bill Veeck had on the game of baseball and because of the insightful stories he tells, Veeck - As in Wreck is still a must-read for amateur baseball historians today, almost fifty years after it was first published.