tl;dr: Entertaining and educational account of the year baseball almost died and two curses may have begun...

The Original Curse dives deep into the 1918 baseball season, the year before the Black Sox World Series-throwing scandal, and poses the provocative question: is it possible that the White Sox were not the first and only team to throw a World Series - and could their crosstown rivals, the Cubs, have done so the previous year? What sounds, at first blush, like a White Sox fan's fantasy, appears to be plausible or even likely after reading Sean Deveny's book. There's not nearly enough evidence to conclusively prove Deveny's hypothesis, but if the case Deveny assembles were to be heard by a grand jury, they would certainly call for further investigation. Unfortunately, too much time has passed and there is no smoking gun (such as a deathbed confession) to conclusively prove Deveny's case. 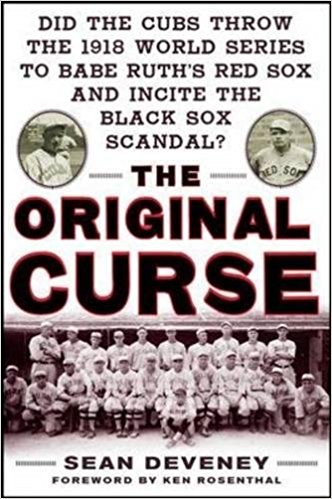 A good history book shatters myths and provides a much more detailed, nuanced, complex picture of a particular situation. Deveny certainly achieves this in The Original Curse. Almost all baseball fans know of the 1919 Black Sox scandal, and think of that White Sox team as committing the biggest possible sin against the game, for purely selfish reasons. 1918 is also wistfully known by Red Sox fans as the last World Series won by their dominant early-twentieth century team before an 86-year drought. However, what Deveny shows is that 1918 was one of the strangest, most dysfunctional years in all of major league baseball history. Yes, the Red Sox did win the World Series that year, but it was anything but a competition between the best, most talented teams and players. Because of the ramp-up of the United States' participation in World War I, the war cast a huge cloud over the entire season, continually pulling (or threatening to pull) players out of the game, shortening the season, and almost cancelling the Series itself. Fans lost interest, players did too, and due to severe financial shortcomings, and the threat of never earning another decent baseball paycheck, some players likely were tempted to take money from gamblers to throw one or more World Series games.

Besides telling the story of the 1918 baseball season, Deveny also details the underlying causes of baseball's early twentieth century gambling problem and the inaction and cover-ups of baseball's powers that be when presented with evidence of the problem. Gamblers and players mingled freely, and gamblers openly conducted their business in major league parks. Should a player desire to make some illicit money from gamblers, there were plenty of opportunities to do so. Deveny also describes multiple acts of suspicious in-game behavior, and multiple cases of players developing bad reputations after being suspected by their managers for having thrown games. With this strong gambling culture as background, it is certainly true that the amount of gambling in baseball far exceeded the amount that has been publicized, investigated and punished.

Deveny writes in an entertaining style, and the book progresses at a fast pace. I actually wish it had been longer and provided even more detail. And, of course, if Deveny had been able to unearth a smoking gun, it would have made the book a must-read by all baseball fans. I definitely do recommend it for serious baseball fans with an interest in the history of the game, and especially fans of the three teams featured most prominently: the Red Sox, the Cubs, and the White Sox. Red Sox and Cubs fans may not like what they learn about their teams, but it is more important to know the facts than the myths.