All too often academically-inclined history books contain prose that only a thesis advisor could love. Authors of these tomes typically are motivated by a desire to impress the reader with their erudition. Hence the writing tends to be long, tedious, and filled with words that send the reader scrambling to the dictionary. The prose obscures rather than enlivens the historical events that motivated the production of the tome, and if the reader isn't put to sleep, they are instead bored to tears. This is thought by some (many?) to be the price to be paid for a serious work of scholarship. 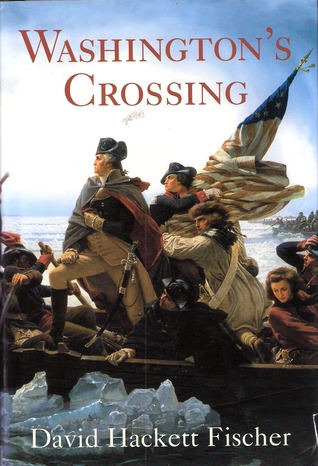 Fortunately, none of what I just described applies to David Hackett Fischer's Washington's Crossing, a well-deserving recipient of the 2005 Pulitzer Prize in history. Prof. Fischer's work contains all the ingredients to produce a near-perfect history book with widespread appeal: interesting, important subject matter (the early stage of the Revolutionary War, and the turning point of Washington's crossing of the Delaware); a narrative that builds interest and suspense over the course of the book; all backed up by impressively thorough and well-documented research. Fischer is a professional historian of the highest caliber, and while he is attempting to produce a definitive tome on this subject that adds to the historical record and corrects errors, he never forgets the lay reader.

There is much that I learned from Washington's Crossing, and with the notes and bibliography provided by Prof. Fischer, much more that I could choose to learn, if I had the time to pursue this subject further. Prof. Fischer corrects the errors in the simplistic story of Washington's crossing, and provides many more accurate reasons why this was so monumental and unlikely an event. Washington's army faced conditions much more dire than I had imagined, and the strategy that Washington and his armies pursued took major risks that, thanks also to a little luck, paid off handsomely. Prof. Fischer builds a credible case that it was a critical event in the birth of a free nation, and had it gone differently, the consequences could have been dire. All in all it is a fascinating story, and worthy of the treatment Prof. Fischer gives it.

Like most busy Americans, I don't read as much history as I should. But I can heartily recommend Washington's Crossing to both lay readers who have a curiosity about the formation of the United States of America, and to professional historians. David Hackett Fischer has written the all-too-rare history book that can appeal to everyone.