Book review: The Metaphysical Club: A Story of Ideas in America, by Louis Menand

tl;dr: An enthralling, entertaining, enlightening story of ideas in America...

Louis Menand's exhaustively researched The Metaphysical Club describes the life and times of a handful of prominent American intellectuals from the Civil War era to the World War era, including U.S. Supreme Court Justice Oliver Wendell Holmes Jr. and philosopher William James. Menand is ultimately successful in his primary aim, which is to show how abstract philosophical ideas can have a major impact on the quality of life experienced by everyday people. 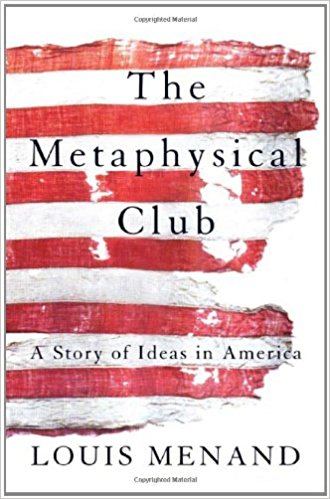 Menand's narrative path encompasses many side journeys, sometimes not appearing to advance towards the end goal, and it is not until the last seventh of the book that we get treated to an overall description of the philosophy of pragmatism. The doings of the Cambridge Metaphysical Club are briefly summarized almost halfway through the book, and the reader at that point learns that the club itself is not (although it is the title of the book) what made the major impact on society; rather, it is what some of the club's members did over the course of many subsequent decades that changed American society.

The great pleasure in reading The Metaphysical Club comes from following Menand on these many side journeys, thereby learning about a cornucopia of subjects, from the politics of slavery, abolition and the Civil War, to what pre-Civil War proper Boston Brahmin society was like, to the impact that Darwin's ideas on evolution had, to the Dartmouth College case and the founding of the modern private American university, to the Pullman car strike, to the initial battles to establish the principle of academic freedom, all underscored with a recurring discussion of race attitudes over the decades.

If this list appears to be a bit of a grab-bag of subjects, that impression prevails while reading the book: although it is all connected, you never quite know what subject Menand is going to explore next. The Metaphysical Club is not the final authority on any of these subjects; rather, it is a top-quality survey work. The subtitle describes the book better than the title: it truly is "a story of ideas in America". It's not "the" definitive story; Menand is exercising his right to explore brief portions of subjects of interest to him and germane to the storyline. But if you are willing to grant him this authorial license, and not protest the course he chooses, then you will be enthralled, entertained, and enlightened.

As a work of history (it won the 2002 Pulitzer Prize for history), Menand also succeeds in providing a great deal of context about the state of the world his subjects were living in, so that we 21st century readers can "see how almost unimaginably strange they and their world were, too." While there are certain timeless truths that were generated by these thinkers, it is also instructive to see just how much they were a product of their times, which (of course) applies equally as well to us, today.