tl;dr: Should be required reading for American schoolkids & citizens...

This book is truly a gem: small, well-crafted, brilliant, and the result of countless hours of hard labor. How many other historians could take a topic as vast as the American revolution, choose precisely those incidents and communications which best illuminate the key principles and principals, throw everything else out, and end up with an engaging series of seven stories that concludes in a mere 248 pages? 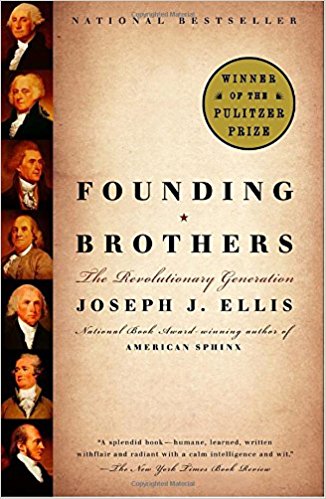 It's hard to imagine a better introduction to the history of the American revolution. Ellis does not attempt to provide exhaustive coverage of every major event over the time period, and he correctly and thankfully avoids a blow-by-blow description of the battles of the war, since the fighting is not directly relevant to the meaning of the revolution. The focus instead is on the character of the key individuals, their different thoughts on what the revolution was about, and how the leadership was able to find a way to start a new political system that has managed to survive for over 200 years.

Besides being an excellent historical overview of the revolution, there is much in Founding Brothers that is directly relevant to today's political discourse. Our country is still debating the proper role of governmental authority and the people (witness the California recall election), idealism versus realism (witness the debate over the war in Iraq), and statesmanship versus partisan politics (just pick up the newspaper). It is fascinating to read what our country's founders had to say about these issues and the strenuous debates that they had, most of which they couldn't resolve definitively either, and which were ultimately decided by razor thin votes (the 2000 presidential election).

Founding Brothers has inspired me to learn more about the thoughts and characters of the founders. When I get to Adams and Jefferson, I may very well choose Ellis's books, since he researches his subjects thoroughly, writes very well, and looks at issues from multiple perspectives. Founding Brothers is a great place to start a study of the topic, and hopefully the recognition the Pulitzer committee gave this book will ensure that it is read by as many people as possible.