tl;dr: A great one-volume biography of our greatest founder...

Founding the United States of America was undeniably a team effort, but Walter Isaacson presents a compelling argument that no person was more instrumental in this monumental historical achievement than Benjamin Franklin. Isaacson does a superb job of not only documenting Franklin's direct contributions to various key events, but also describes how he influenced the thoughts and writings of other contemporaries, such as Thomases Paine and Jefferson. Through his writings, his accomplishments, and his life story, Ben Franklin has touched the lives of more people than has any other American. Isaacson's book will see to it that this continues to be true. Every American citizen who considers him/herself an educated person should study Ben Franklin, and Isaacson's book is a wonderful way for present day Americans to do so. 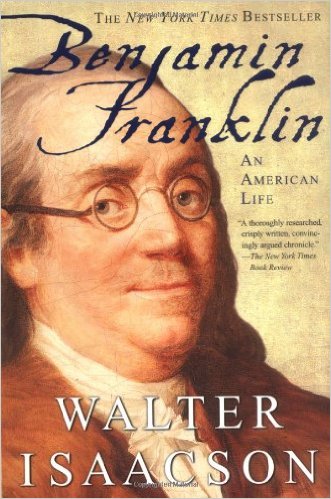 Although Walter Isaacson's well-researched and extensively footnoted book is fairly lengthy, I found myself wanting to know more about many of the events in Franklin's life, especially his scientific accomplishments. Isaacson, the former managing editor of Time magazine, at times settles for a Time-like summarized description, rather than a New Yorker-like unconstrained dissertation. Given Franklin's many accomplishments, this is (regretfully) necessary in order to prevent the book from expanding to multiple volumes. After all, as shown by some of the sources Isaacson cites, entire books have been written about months-long periods of Franklin's life, and academics at Yale are finishing up a 40 volume collection of Franklin's writings. All in all, Isaacson does an admirable job of presenting Franklin's life story in one volume. His writing is engaging, and his vocabulary and sentence structure are not at all too academic, which makes for a very pleasurable read.

Over a long and mostly happy lifetime, Benjamin Franklin compiled an amazing list of accomplishments. He was a true Renaissance man, operating at the leading edge of a wide variety of endeavors. He was a skilled businessman, inventor, scientist, writer, founder of institutions, and politician / diplomat. Knowledge has advanced since Franklin's time, and the world is a more crowded and complicated place, so mankind will likely never again see the likes of a Benjamin Franklin. Walter Isaacson's book brings the 18th century Benjamin Franklin to life in the 21st, and for that we can be grateful.