tl;dr: Half ghost-written autobiography, half biography...

Unlike his biographies of Benjamin Franklin and Albert Einstein, Walter Isaacson enjoyed unprecedented access to the subject of his latest biography, Steve Jobs. Jobs, knowing that he was likely dying of the cancer that ultimately did take his life, persuaded Isaacson to produce this book and granted him long interviews, presence at various events, and rights to examine certain material evidence, including the contents of Jobs' own personal iPod. 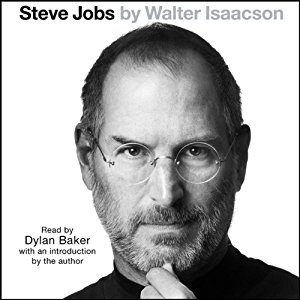 Although Isaacson also does interview many others whose lives Jobs touched, including more than a few who would not be considered "friends of Steve", the resulting book Steve Jobs still reads in many parts as though it were a ghost-written autobiography, rather than a fully objective biography. This isn't necessarily a bad thing, except when it causes Isaacson to spend too much time analyzing the intricacies of various Apple product line strategies and too little time putting Jobs' accomplishments into context and objectively comparing Jobs to other important business figures.

That said, there is no doubt that Jobs has changed multiple industries in significant ways and hence is a person worthy of study. Steve Jobs does a more-than-adequate job of chronicling Jobs life, both as a businessman and a person. Jobs is a fascinating character and his success has caused others to emulate and cite his thoughts and actions. The book Steve Jobs is as good a guidebook as any to the way Jobs thought and behaved.

I listened to the unabridged audiobook version of Steve Jobs on my iPod Nano, which I thought was a very appropriate way to consume the book. The downside, of course: no pictures, and at times it was hard to tell if the text was a direct quote or the author's own words.