Samuel Florman gives himself a significant task: to explain who engineers are, what motivates them, how they derive pleasure in their work, and, most importantly, how their work is connected to the overall progress of civilization and the human race. He succeeds brilliantly, in a work that has deservedly become a classic. 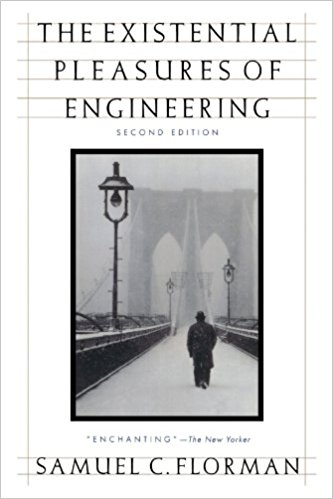 Florman covers a great deal of ground in his book, with a focus on the last 150 years of the engineering profession. He quotes extensively from other works of literature and culture (from Homer to Paul McCartney), and has obviously read widely and thought deeply about his subject matter. He spends a good portion of his book refuting the views of people he calls antitechnologists, whose views were popular among the Sixties counterculture crowd. But ultimately, what Florman accomplishes is to provide a constructive, pragmatic philosophy of the Engineering profession, that allows society to move forward to solve the never-ending set of problems that we face.

As a good work of philosophy (or science) should, Florman's book (originally published more than 30 years ago) provides an intellectual framework for interpreting events of today. Although the views of the "strong" antitechnologists have failed to incite a large-scale revolution of Americans returning to the agrarian villages of yesteryear or the communes of the Sixties, the battle between technophiles and technophobes continues unabated. Florman's book provides insights into the debates over issues such as energy policy, environmentalism, genetically modified foods and drugs, land use policy, globalization, as well as the future direction of the U.S. economy, especially after the technology/Internet boom and bust of the late `90s and early `00s.

Ultimately, Florman would argue that these are not issues of technology; engineers can be directed to build fail-safe nuclear power plants or super-efficient solar energy collectors or both or none. These are decisions to be made by an informed citizenry, their political representatives, and regulated profit-seeking corporations - ultimately, a society that understands technology and risk, and that does not exhibit Luddite antitechnology biases. Meanwhile, I am sure he would be dismayed to see U.S. college engineering enrollments declining, especially among native-born Americans - there are plenty of people in the rest of the world who still value the Engineering profession.

I highly recommend this book to anyone thinking about entering or already in the Engineering profession, to anyone interested in learning more about the profession, and to teachers and those in positions of influence over young people's choice of careers. Ideally it would also be read by politicians and antitechnologists; it would be very interesting to hear how someone would directly refute Florman's arguments.