tl;dr: Hopefully the second half is better than the first...

Perhaps I am making a mistake reviewing Blackout before reading its companion All Clear, because at this point I cannot quite see why these two books won the 2011 Hugo Award for Best Novel in the science fiction and fantasy genres.

The two books are absolutely halves of a singular whole; Blackout does not stand on its own as a complete story. As does many a good pulp fiction series, it ends at a precarious cliffhanger. Perhaps Blackout will turn out to be nothing more than a very long elaborate setup for what turns into a thrilling sci-fi story, but at present I have my doubts. 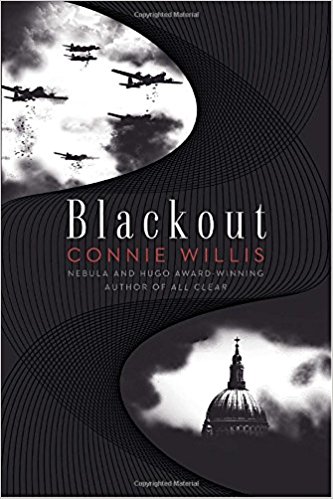 Although billed as science fiction, Blackout is better classified as historical fiction - and historical accuracy is its primary strength. Yes the subjects use a time machine to travel back to England during World War II, but that's where almost all the action takes place, and the focus is on what it is like to experience some of the major events of the war, such as the London blitz. Here Blackout shines, as the pictures Connie Willis seem realistic and accurate. They are more compelling than a dry history book would be, and seem imbued with the legitimacy of a first-hand account (although they are not, of course).

The science fiction portion of the story is where Blackout has problems. Willis never fully explains the mechanics of how the time machine works, and in particular how the Time Machine Paradox is supposed to be resolved. Supposedly there are "divergence points" that prevent the time travelers from participating in events where the main course of history might easily be changed (such as an assassination attempt) - but then the characters stumble into these events anyway. The time machine is also malfunctioning at the beginning of the story, yet the operators at Oxford University madly continue using it as much as possible instead of investigating the failures. Given that academics are never in a hurry to do anything - in fact academia is where one goes to escape the pressures of the rat race - this was a bit too hard for me to swallow.

Blackout has some other more minor flaws. It switches between different storylines and time frames without recapping the action, so it is a bit hard to recall what is happening. At times Willis goes on and on about a single topic, such as bratty kids, when her point has already been made many pages ago. The length of some of these topics encourages the reader to gloss over some of the details - yet certain details of the story matter tremendously. Because of this, I do think Blackout could have been improved with tighter editing.

Maybe, however, everything will all make sense once I read All Clear, and the flaws of Blackout will either turn out to be attributes or minor quibbles. The story is definitely not complete until the end of All Clear, so I will keep plowing forward.