tl;dr: Blackout + All Clear = one long novel, but not a masterpiece...

Now that I have completed All Clear, I can state emphatically that Blackout and All Clear are two volumes of the same long novel. Neither work stands on its own, and I couldn't even see a particular reason why Connie Willis put the division between the two volumes where she did. She might as well have made each volume the same page length (as it is, All Clear is the longer volume).

I can also now officially wonder why Blackout/All Clear (BAC) won both the Hugo and Nebula Awards for the best science fiction novel of the year. Simply put, BAC is not a literary masterpiece, nor is it an innovative work that takes the science fiction genre in a new direction. I found it to be a pretty straightforward storyline that is most noteworthy as a piece of historical fiction rather than science fiction. The characters do use a time machine to travel back to World War II, and the limitations and problems of the time machine and time travel in general do impact the plot, but the most interesting aspect of BAC is Connie Willis' detailed accounts of World War II's impact on people in Britain. 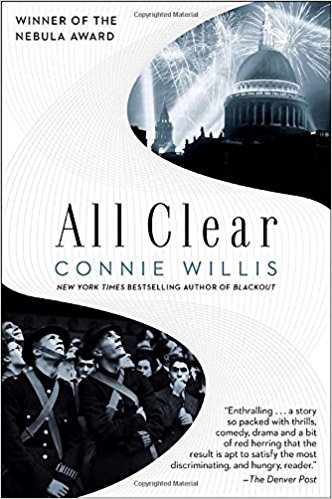 The sheer length of BAC creates another problem for Willis. By the time she is wrapping up the storyline at around roughly page number one thousand, she has to refer back to details of events that happened many hundreds of pages ago. Because it took me so long to read BAC, I had a general remembrance of these prior events, but I couldn't remember the details, in particular how the same street scene would look through the eyes of different characters. If you do read BAC, I would recommend reading it as fast as possible. Willis could have produced a much tauter storyline if she had left out much of the filler, such as the exploits of Binnie and Alf and various bombing scenes that don't actually matter to the main plotline. If she pared the story down to the bare minimum scenes plus just a little filler to prevent the reader from piecing things together too early, I think she would actually have a thriller on her hands. She would have something closer to an Agatha Christie-type mystery to be solved by the reader (Willis not only obviously likes Agatha Christie's stories, but she writes Agatha into BAC as yet another minor character).

I am glad I plowed through All Clear to see how all pieces would be put together into a coherent whole. But I wouldn't call BAC a "must read". Readers with an interest in World War II would probably enjoy a well-written history book more than this work of historical fiction. I also think there are science fiction novels out there that do a better job of captivating the imagination.