tl;dr: Baseball at high altitude can be fun in the sun...

I wasn't able to make it to any Sox games in Arizona, but I did manage to take advantage of interleague play against the Rockies to add another notch into my MLB stadium belt by visiting Coors Field for the rubber game of the Sox/Rockies series. Evidently a fair number of Sox fans had the same idea. Unlike the Seattle game I attended earlier this year, I would say 10% or more of the crowd was Sox fans, both travelers and Chicago expats. We made our presence known, and by the end had much to cheer for. 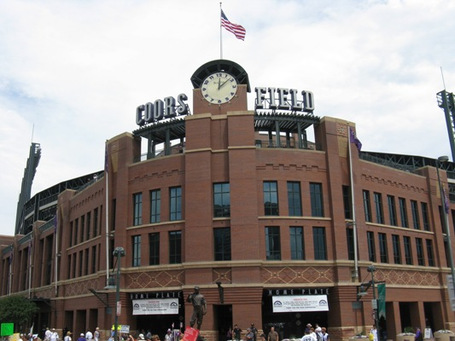 Upon approaching the Coors Field home plate entrance one sees what I felt was a very sad sight. In a highly prominent location outside the gate, about where the Sox erected the 2005 World Series statue at The Cell, the Rockies have also erected a statue. But since they have no World Series win, and since they also have no prominent retired Rockies players, the status is a statue of an anonymous player entitled "The Player". That's what happens when you're an expansion franchise, I guess. Perhaps the Rockies will soon replace it with a Todd Helton statue. Today was Helton's 2000th MLB game, and Rockies fans and Sox fans alike gave him a standing ovation during the game. 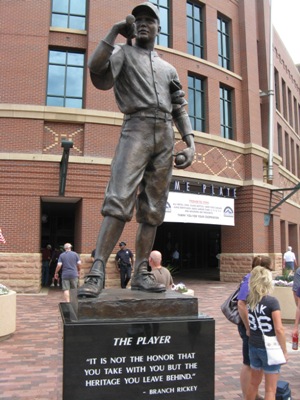 Much of Coors Field feels like other recent "retro" stadiums - it reminded me a lot of San Francisco's AT&T Park without the incredible views and the bay. Coors Field most prominent architectural feature is the "Rockpile", a second deck of bleachers way out in dead center field. With the centerfield fence itself at 415 feet and then two seating decks with lots of rows in the second, I've heard the seats at the top of the Rockpile are some of the worst in any MLB stadium in terms of distance from home plate. I climbed up there (no specialized equipment is required but you may want an oxygen tank due to the thin mile-high air), and those seats seemed a little bit farther from home than the last row of Fenway's right centerfield bleachers (if you ever go to Fenway, don't sit in the bleachers - it will shatter your illusion of Fenway as a quaint small old stadium). 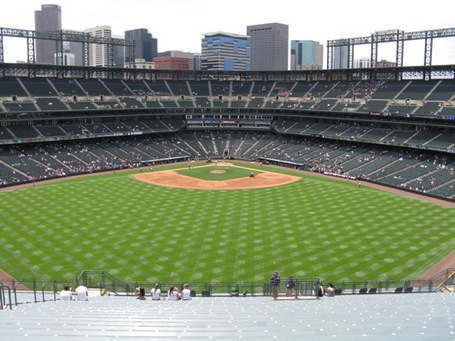 Plenty of mountains to climb in Colorado, including The Rockpile

I had heard rumors of rude Rockies fans, but I didn't encounter any problems whatsoever. Perhaps it was because I had so many of my Sox fan brethren around me at all times - Sox fans were everywhere. I even saw a few people that I call the "Lost Cubs fans". You've seen these people too: they show up at non-City Series Sox games in full Cubs regalia. I am not sure what these people are doing: did they buy a ticket for "Chicago vs. Colorado" only to discover that it is the Sox and not the Cubs? Do they even know or care that the Cubs aren't playing, or are they just there for the beer? As for the beer, there was indeed Coors and Coors Light, but also plenty of Budweiser taps. You would think that naming rights to the stadium would allow Coors to make sure no Bud is served, but there's plenty of Bud at Coors. The food at Coors was standard ballpark fare, and the brats couldn't measure up to the brats at The Cell. 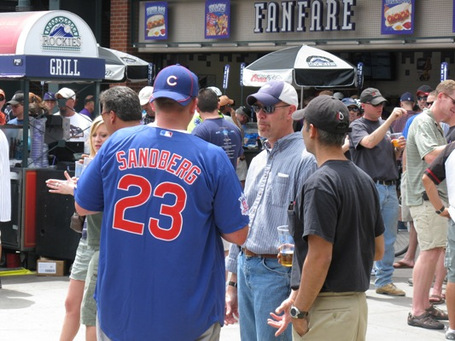 "Is my team playing? Do I even care?"

As for the game, I was concerned when I saw the Sox's lineup, with no Konerko, no AJ and no Q, and Dunn not only in the game playing first, but batting third, up from the five hole. After Tulo beat Peavy in a long at bat for a three run homer in the bottom of the first, I told the people around me that it was going to take a long time for the Sox to make up those runs. It did indeed, but the wait was worth it in the end. 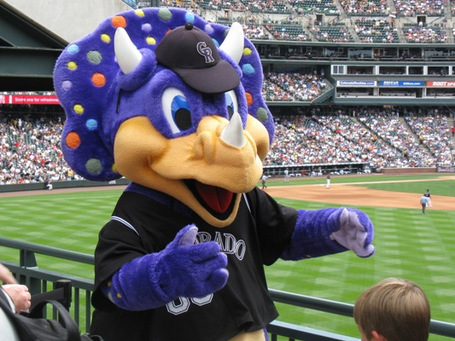 Do not expect scientifically accurate dinosaur reproductions in Colorado - the Field Museum has much better ones.

I will avoid spoiling the good mood of the day, the game and this write-up by keeping my frustrations with Adam Dunn mostly to myself, except to point out that, through the Sox's first 6 innings, his bat had accounted for 5 of 18 Sox outs by lining into a double play, popping up, and grounding into a double play. At least he's actually making contact and hitting the ball into fair territory - that's a step forward. He even faced a lefty reliever and achieved the sole positive result he's showed us he can do versus a lefty on occasion: he walked. I would have pulled Dunn before the at bat, but fortunately Ozzie pulled him afterwards and that set in motion a chain of substitutions that eventually saw our three best current hitters (Paulie, AJ and Q) get into the game and the offense finally get into gear. Coincidence?

The Sox's offensive drought through the first six innings made the runs all the sweeter when they finally did come. (The Sox's sole run up to then, in the second, was more sour than sweet, since they should have scored more after Rockies pitcher Aaron Cook loaded the bases via two walks and a HBP and then threw a wild pitch). The Sox bullpen did its job while the Rockies didn't, and by the time the top of the tenth rolled around and the Sox loaded the bases, Rockies fans were silent while Sox fans were doing "Let's Go White Sox!" and especially "Paulie" chants. There was much high fiving when Pierre came through with his big hit, and Sox fans were standing and clapping for Sergio to close it out with two outs in the tenth. Rockies fans offered no resistance that I could detect - at that point they knew they were beat. 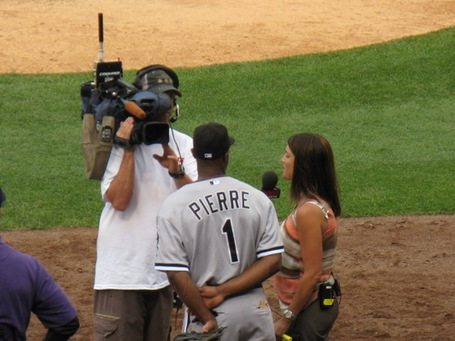 Your hero of the game: Juan Pierre!

On the drive back to the airport I amused myself by listening to the Rockies post-game show. The first Rockies fan caller said he had the answer to all the Rockies woes: "what the Rockies need is a smart slap hitter like Juan Pierre who really knows how to play the game of baseball!" Other callers complained about the Rockies players' lackadaisical attitudes and the team's inability to win one run and extra innings games (evidently the Rockies are one of the few teams worse than the Sox in extras). One caller demanded the head of Rockies hitting coach Carney Lansford and even pointed to the White Sox as a team that has gone onto greatness after replacing their hitting coach - then he corrected himself and said "Oh wait, that was Cleveland." Chris Rongey would have been amused.

In closing, a travel tip about the Denver International Airport: it's not in Denver. In fact, it's not even in Colorado. It's in Kansas. Be prepared for a long drive from the airport to re-enter civilization, let alone Denver city limits. If you arrive at night and, during the drive, start to wonder why you can't see any buildings and maybe start to think you're in the middle of nowhere, it's because you are. Keep driving. You have to drive because there is no commercial airplane service between the Denver International Airport and the city of Denver, although there should be.