tl;dr: This place will always hold a special place in the hearts of White Sox fans...

White Sox fans should never forget the significance of Minute Maid Park and the Houston Astros. After all, two of the four most important games in the past fifty years were played there and against that team, including the most important "Sox Win!" of the past 90+ years. Crazies such as myself, who occasionally dust off the 2005 World Series DVDs (both to relive the glory and to remind ourselves what the White Sox actually look like when they are playing really good baseball) have a TV viewer's familiarity with the quirks and charms of Minute Maid. That desire to experience the setting of the Sox's greatest recent triumph, plus my quest to visit every MLB stadium, meant that someday I would make the journey to Houston.

A while back a business trip to Dallas arose on my schedule for the middle of this week. Initially I was bummed because there was no way to move it to the end of the week, which would have allowed me to attend the season opener against the Rangers in Arlington (another stadium I have yet to visit). Then I realized the Sox were playing a couple games in Houston during my trip. It's very easy to get between Dallas and Houston: Southwest has flights every hour, and even more often at the beginning and end of the business day. I could finish my afternoon meeting in Dallas and make it to Minute Maid for first pitch. If the meeting ended early or late, no problem - just hop on whatever plane is leaving next. What could possibly go wrong with this plan? Unfortunately, I had failed to account for the worst tornadoes to hit the Dallas area in thirty years. 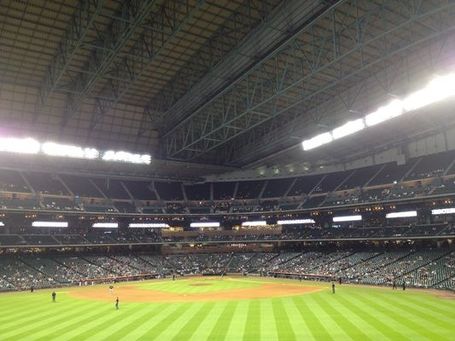 Minute Maid Park with the roof closed: not quite as controversial a topic in April 2012 as it was in October 2005

What exactly is one supposed to do when one is bombing down the interstate at 75mph and the electronic billboards are displaying not ads but a public service announcement: "Severe Tornado Warning - Seek Shelter Immediately"? Pull onto the shoulder and park? Find an underpass? Exit, duck into a McDonalds or gas station, and crouch in a bathroom stall? I didn't see an obvious way to improve my survivability odds, and as I didn't want to decrease my odds of attending my first Sox game of the season, I kept on driving. The storms shut down Dallas's airports for several hours, and by the time Southwest resumed flying the game had started. I made it inside Minute Maid at the start of the seventh, with the Sox holding a comfortable 4-1 lead, after telling my taxi driver he'd get a nice tip if he ignored local traffic regulations. 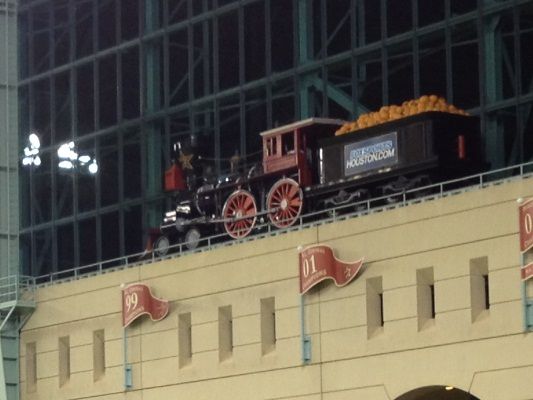 The choo choo train that is supposedly fueled by oranges - but what fueled this train when the stadium was known as Enron Field? Bogus accounting statements?

It was well worth the hassles. Positive vibes washed over me from multiple sources upon entering Minute Maid Park: the joy of seeing firsthand the venue where the 2005 Sox won it all; the normal pleasure of walking into an MLB stadium for the first time after months of no baseball; the quirkiness of the stadium; and the fact that the Sox were ahead and went on to win the game 5-1. The first game of the season is always a time for hope and optimism, and Minute Maid Park brought out those feelings in me more than any other stadium I've been in as the visitors. 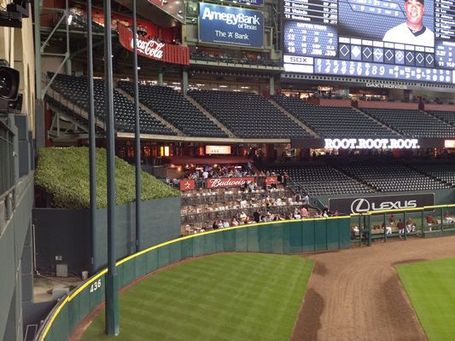 Tal's Hill: where home runs go to die, as the Tank discovered in the 8th inning

A lot has changed for both teams since 2005, when the White Sox and Astros were both at the top of their respective leagues. With the departure of Mark Buehrle, the Sox have but two remaining players from the World Series roster (Paulie and A.J.) and the Astros have but one (pitcher Wandy Rodriguez). There is considerable angst among many Sox fans over how the team has fallen off since 2005, with even Paulie commenting about this, but at least we haven't fallen as far or as fast as the Astros, who won only 56 games last year, the worst total in baseball and the worst in franchise history. 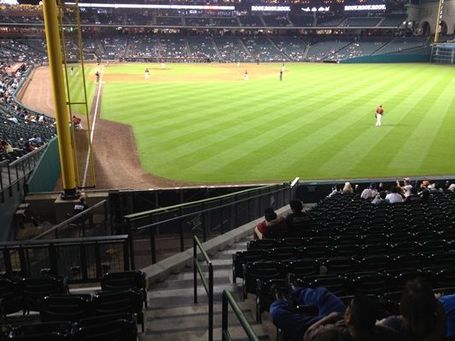 The 2005 Killer B's are well represented at Minute Maid. Lance Berkman is still playing, of course, so there's no shrine erected in his honor, but his jersey is the most popular one I saw in the stands, even though he's now on his second team since leaving the Astros. (An aside: Berkman, like Paulie, is a smart professional hitter who pulled his weight in the 2005 series - it's his teammates that didn't - and he inflicted some serious pain on the Rangers in last year's World Series.) 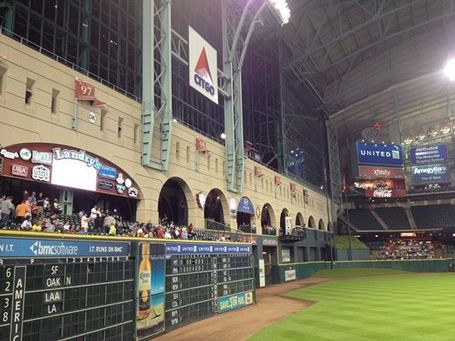 The Crawford Boxes with hand-operated scoreboard: Berkman's favorite spot to land cheap home runs, but fortunately he didn't do so against us

There are shrines, however, for two other Killer B's: Jeff Bagwell and Craig Biggio. Bagwell's focuses on his 449 career home runs (a figure that Paulie will hopefully surpass before his current contract is up), but it was sad to see 2005 listed as his final year. Those pathetic World Series at bats in which he grimaced in pain and frustration as Sox pitchers blew it by him were the final at bats of his big league career. 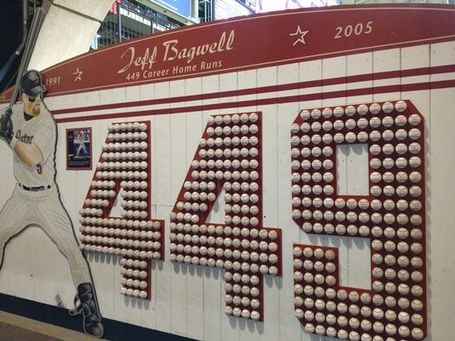 Craig Biggio lasted a couple more seasons after 2005, long enough to collect his 3000th hit. He was a hard-nosed (dare I say "grindy") player, and I think you have to respect a guy who grinds out 3000 hits over 20 seasons. 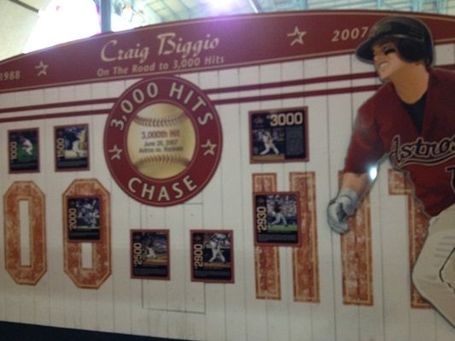 Craig Biggio kept on grinding even after 2005

It's not much of a stretch to posit that Minute Maid Park is a happier place for White Sox fans than for Astros fans these days. If you go to one of the Sox/Astros interleague games at Minute Maid this summer, I think you will find Astros fans to be a somewhat downtrodden bunch who accept and perhaps even welcome south siders. There is, after all, at least one food stand selling replica Chicago hot dogs (although "neon relish" must be a garish Texas version of sweet green relish). 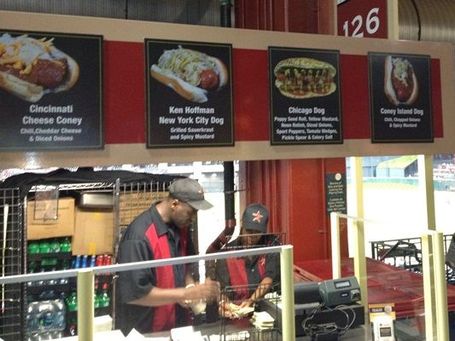 Speaking of relish, Sox fans should be relishing the opportunity for our team to beat up on the Astros when they join the AL. After all, why should the Cubs and their fans have all the fun? Hey, maybe we can get the Pirates to transfer into our league (if not division) too. After the second game of this series ended in a tie, the Sox are still undefeated in Minute Maid. On the one hand nothing counts in spring training, and the real games with the Astros take place later this summer. On the other hand, maybe a successful visit to Minute Maid Park is just what the 2012 White Sox need to spur them on to another unexpectedly magical season.