tl;dr: A warm-hearted masterpiece that covers much ground...

E.L. Doctorow packs an amazing amount of emotional depth, observations and messages into a mere 208 pages in Homer & Langley. The book explores many themes: mental illness and how it appears from an insider's perspective; physical handicaps; war and politics; the control society exercises over the individual; the filial bond; and the trajectory of American life and society over the course of most of the 20th century. None of these themes is an outlier: they are all integrated into a cohesive whole. Most impressively, Doctorow tells his tale in a loving, warm-hearted and at times humorous manner that conveys his deep humanistic understanding.

Doctorow is at the top of his game in Homer & Langley. I am hard-pressed to find a single flaw with it. Perhaps, because the main characters are male and they only briefly interact with females, the book could be said to have a male perspective, making it less appealing to female readers. But certainly one of Doctorow's inspirations for the character Homer is Helen Keller (although this is unmentioned), and it is interesting for the reader to contrast Homer's physical degeneration and suffering with Keller's. 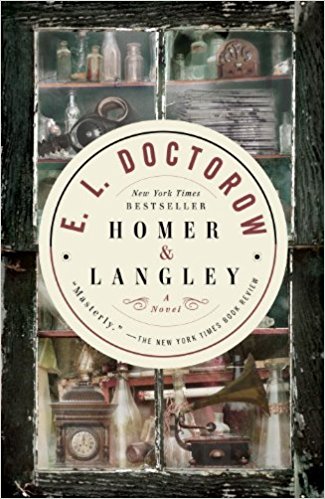 Doctorow's sentence structure is superb. Numerous sentences are so delicious I was tempted to write them down for snacking on later. Quite often Doctorow's tongue is firmly in cheek when conveying humorous observations, which is completely appropriate for the main character and narrator of Homer. The effect is magical.

Homer & Langley is thoroughly enjoyable on its own. It would also be a fantastic book group selection, because of the many themes and the easy writing style and short length (meaning most book group members would actually make it all the way through the book). It is hard for me to imagine anyone not liking Homer & Langley, unless one is expecting it to be a nonfictional account of the actual Collyer brothers of New York - it is not.