Book review: Eight Men Out: The Black Sox and the 1919 World Series, by Eliot Asinof

tl;dr: Still one of the best sports books ever written - it holds a mirror up to our society...

It's impressive that a book written in 1963 about events which transpired in 1919 is still widely known and read in the next century. That meets the criterion of a "classic" by my reckoning. What is it about Eight Men Out that accounts for its enduring popularity, for the fact that Hollywood has made multiple movies featuring the storyline and characters decades after the book was published, for the fact that the title itself is recognized by most literate adults, even those who are not sports fans? Is it the story, the characters, the writing, the momentous nature of the historical events, or something more?

Eight Men Out endures because it is so much more than a book about a particular team, or event, or sport, or even a particular time in history. It is all of these things, to be sure, but it is also a timeless story about human fallibilities, money and power, and the clash between people of radically different backgrounds. Like Shakespeare's works, Eight Men Out features a compelling storyline that grabs and holds the readers interest; but also like Shakespeare, the reason Eight Men Out endures is that, although our society has changed, it still illustrates some timeless, fundamental issues about the human condition and behavior. 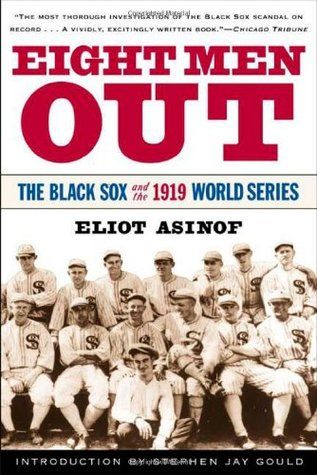 Yes, our society has changed, and baseball and professional sports have changed, and it is unlikely that the incident at the core of Eight Men Out (the throwing of the 1919 World Series by eight Chicago White Sox players) could ever happen again. This is chiefly because the players are paid so much better now, and it is unlikely that professional gamblers could come up with enough money to tempt them. However, you have to go no further than today's front page headlines to find comparable tales of corruption, power plays, cover ups, and especially incidents where the key power brokers behind them escape unscathed while minions with much less power take the fall. Baseball and professional sports may have made some progress against gamblers, but the human flaws at the heart of the story in Eight Men Out survive and are thriving today.

Eliot Asinof does a great job documenting the detailed events and presenting them in a compelling manner. Eight Men Out is a thoroughly enjoyable, satisfying read. I highly recommend it not only to baseball fans or amateur historians, but to everyone.