tl;dr: Peter Hessler chronicles growth and change in China (and himself)...

China is indeed currently undergoing the largest, fastest modernization and transformation of a major country in human history. The scale of change in all areas (buildings, infrastructure, geography, economics, social, cultural) is vast. Yet the current transformation is but one in a series of major historical changes in the past century, as China has gone from empirical rule through civil war to the expulsion of foreign colonial influences, to the excesses of communism including the Cultural Revolution, to the current transformation, officially called "Reform and Opening". 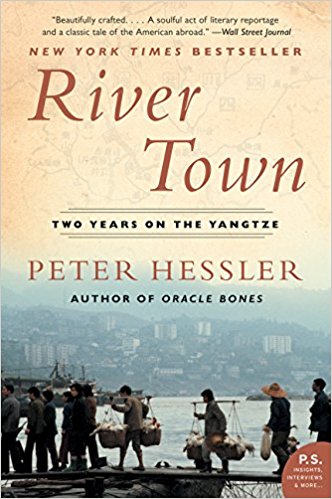 What does this change look like on the "ground level" of average Chinese citizens, and how do they feel about it? What tensions and conflicts arise as the Chinese people are forced to (again) change their attitudes, behaviors and values? What beliefs and practices persist through the change? What might all this change lead to for these people? These are the questions that interest Peter Hessler, and that he focuses on in River Town.

After completing graduate studies, Hessler signs up for a two year stint in the Peace Corps, and is assigned to teach English literature to Chinese teachers-in-training at a college in a relatively small, out of the way Yangtze River city. River Town chronicles these two years of Hessler's life, as he explores the city, learns Mandarin, and tries to get to know as many different people as possible. I found River Town to be a fascinating book, as Hessler does a superb job of describing people's thoughts and actions, and putting them into the greater context of China's politics, culture and the ongoing transformation of the country. The stories Hessler includes are engaging and entertaining, and sometimes funny. Hessler has a real love for the Chinese people (although not for many aspects of the political system), and it shows in his writing.

I read Hessler's second China book (Oracle Bones) first, and thoroughly enjoyed each. Although it is preferable to read the first book first, I don't feel I missed out on much by reading them in reverse order. If you only have the time or inclination to read one, I recommend River Town as the slightly better of the two, but both are highly enjoyable and educational.