Book review: Oracle Bones: A Journey Through Time in China, by Peter Hessler

tl;dr: Endearing portrait of the impact of China's changes on her people...

China is undergoing an unprecedented (in scale), historic, monumental transformation as the country sloughs off the shackles of communism and various failed political ideological witch hunts, and focuses instead on modernizing and industrializing, to raise hundreds of millions of people out of the poverty of subsistence farming. Reading the newspapers in the United States, one catches only the briefest glimpses of what is really happening and what it means to people inside and outside China. And if one pays attention to the words of the top politicians of the U.S. and China, and the key political issues that the two countries tussle over, one is likely to completely miss the true nature of China's transformation. 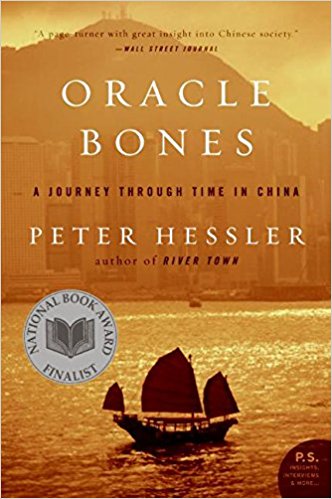 In Oracle Bones, Peter Hessler has done a remarkable job capturing and communicating the impact of China's changes on her people, in an endearing, highly readable narrative. Hessler focuses on a few individuals from "the masses", rather than "the elites": a money changer/trader, a few teachers, factory workers, a taxi driver, plus some archeologists and others working to understand and preserve China's past. The stories of what these people experience as China undergoes its latest transformation (as well as prior ones) put China's changes into a human context, and explain in emotional and personal terms what could never be adequately captured by a list of statistics. Occasionally the words or actions of the political leaders intrude into the stories, and one gets a strong sense of just how disconnected the leaders are from day-to-day life. China's latest transformation, while initiated by a few key actions from the top leaders, is truly an all-encompassing grass roots change in behavior, attitudes and values.

Hessler has a great vantage point to bring these stories of average Chinese folks to English readers. He speaks Chinese, and taught English in China for two years (an experience captured in his previous book, River Town). For the years that Oracle Bones covers, he was primarily a free-lance writer based in Beijing and traveling throughout the country. With few attachments to other people or institutions, he is free to pursue his stories wherever they take him. He practices longitudinal narrative fiction, meaning that he follows the storyline of various people over a multi-year period. Interwoven with the present day stories are stories about various historical artifacts, sites and the people exploring them, which convey the high degree of importance the Chinese place on their history and culture.

I highly recommend Oracle Bones to anyone interested in learning about the impact that China's present-day changes are having on the people of that country.