tl;dr: A life contemplated versus a life lived...

The latest (last?) installment in Philip Roth's Zuckerman series of books finds Roth's writer alter-ego Nathan Zuckerman, writing in the first person, taking a trip to New York for a medical procedure after spending many years in nearly complete isolation in the Berkshires, working on his writing. Zuckerman's mind and body have been breaking down because of the aging process, and Zuckerman had already chosen (and arranged for himself) a lifestyle of withdrawal and seclusion, to best be able to devote his remaining physical and mental capacities to his craft of writing. The trip to New York, however, exposes him to an old friend in need, new acquaintances including an enchantress, and conflicts that reinvigorate him, causing Zuckerman to consider getting back into the fray of human relations. 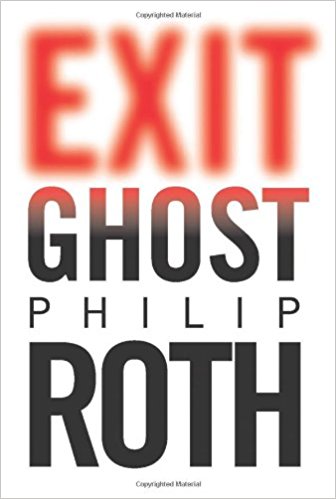 As is always the case in Roth's writing, Exit Ghost works on multiple levels, and is concerned with much more than just the plotline. Exit Ghost is first and foremost a treatise on aging and the decisions and sacrifices that must be made during the long downward slide leading ultimately to the grave. Roth describes in vivid detail Zuckerman's physical ailments and the diminishment of his mind's ability to remember recent events. Roth shows how these not only impact Zuckerman's daily life, but also (and more importantly) the major choices Zuckerman must make in how to live his life. Should the aging process be fought at every step with all mental, physical and medical means available, or should one be more accepting towards the inevitable? Just what does it mean to live and to make the most of the finite time we each have left on this planet? How is one's work and one's ultimate legacy to be balanced against the need or urge to engage in human relations and resolve the conflicts that arise? In Exit Ghost Roth asks, analyzes and attempts to answer these questions.

As is the case with Roth's Zuckerman books, some people will read Exit Ghost with a focus on trying to determine how many of the conditions and events Zuckerman describes actually apply to Roth. While this may amuse and intrigue some, it is not at all an important issue. Had Exit Ghost been written by a 40 year-old Roth, it would still stand on its own as a great short novel. But if Roth's mind really is starting to degenerate to the point that, as Zuckerman states, makes it harder and harder to write a novel, I hope it holds out for as long as possible. I thoroughly enjoyed this Roth book and hope to read more new Roth books in the future.