John Barth's first novel will celebrate its fiftieth anniversary of publication in 2006 (I read the 1967 revised edition, which Barth rewrote primarily, he says, to restore his original ending). Should this almost 50 year-old book, whose protagonist was born in 1900, still be read in the 21st century, by people who may not have even been alive when Barth wrote it? Emphatically, positively, yes! 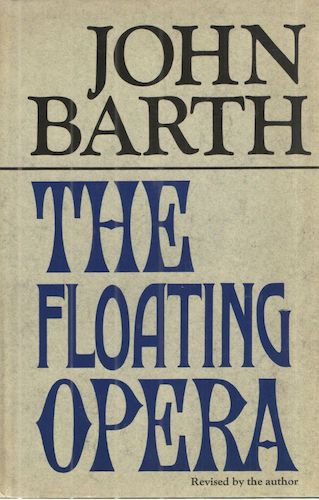 The Floating Opera serves as an excellent introduction to the body of work of one of the 20th century's greatest writers (time will tell), and also stands on its own as an engrossing, amusing, thought-provoking tale. It establishes many of Barth's common themes and settings: the flawed, cynical (yet also fun-loving) protagonist; impossible quests; the absurdities of society's structures and laws; philosophy and morality; coastal Maryland and boating on the Chesapeake. Barth's later works are longer and much more intricate, so The Floating Opera is very much like Beethoven's first symphony: a simpler work than his later masterpieces, but which still shows definite signs of genius, originality, and timelessness.

The storyline, like Barth's other works, is quirky and highly original. It describes the lead-up to an event that, because of the way the book was written (in the first person), the reader knows cannot have taken place. Barth openly explains the disjointed nature of the book's structure (which is just one way that the floating opera of the title is important to the story), and everything holds together in the end.

The Floating Opera's protagonist, Todd Andrews, is a lawyer who has developed a detached, cynical view of the world. His mentality is perfect for his profession, and he wins his cases by crafting intricate technical loopholes that reduce his cases to absurdities. Thirty-five years before the Johnnie Cochran's poetic words in the O.J. Simpson trial, Barth prophetically describes a similar situation of the "bon mot" winning out over the "mot juste". But this is just one of the amusing vignettes in The Floating Opera. Barth also describes the challenges of an open love triangle, different ways to approach old age and death, the drawbacks of various outlooks on life, and an intense father-son relationship. Comic relief is never too far away, especially when the various crusty old men in the book are speaking.

How to rate The Floating Opera? On the Barth scale, it is not his greatest masterpiece, so you'd have to give it less than 5 stars. But on the scale of all works and all authors, it definitely deserves a 5 star rating.