Book review: Said in Stone: Your Game, My Way, by Steve Stone

Steve Stone knows baseball, as he has proven countless times in his broadcasts by predicting exactly what will happen next, whether it is the choice of a pitch, the outcome of an at bat, or a strategic game move by a manager. As both a player and a broadcast analyst for the Cubs and White Sox, he is extremely well-respected on both sides of Chicago. Over the years of playing and studying the game he has assembled a wealth of knowledge, a fraction of which he imparts in his enjoyable book Said in Stone: Your Game, My Way.

Said in Stone: Your Game, My Way will prove to anyone who may think that baseball is a fairly simple game that there is much going on beneath the surface, whether it be pitch sequencing, defensive positioning, base running, game strategy, or all the beyond-the-game strategy employed by teams' front offices and those who run the sport. Stone first details his thoughts about each of the defensive positions, sprinkling in tips on how to play the position alongside anecdotal stories from Steve's career and observations of current major leaguers. He then does the same for the manager, the front office, and the commissioner, closing with his predictions and opinions for the future direction of the game. 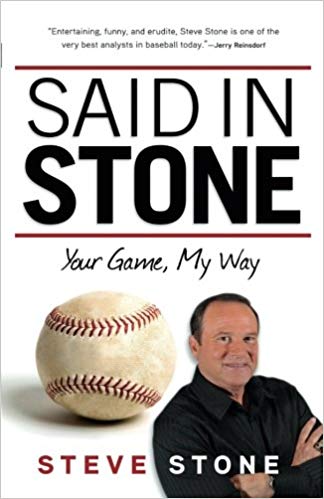 Steve's tips on how to play the positions aren't comprehensive, because Said in Stone is not meant to be a definitive instructional guide. But they are very insightful, and I'm sure that most players and fans will learn from them. The reader will certainly realize that there are many examples in major league games where players don't make the optimal move, which is something that Steve often points out on his broadcasts. The anecdotal stories are instructional, and his observations on the game and various players and team are insightful. It is clear that Steve has a sharp mind, and has learned much over his many decades in the game.

Reading the chapters on managing and especially the front office, it is clear that Steve could perform various roles in overseeing a club. Towards the end he anecdotally tells a story about being part of a management group that tried to buy the Oakland A's. It would be interesting to see Steve take part in the management of a club, but White Sox fans are very happy to have him as the television color analyst alongside Ken "Hawk" Harrelson.

My main complaint about Said in Stone is that it does not appear to have been edited or proofread very well. There are a few incomplete sentences, and more that are awkwardly worded or that don't convey a point very well. Within the chapters, the topics may jump from one to an unrelated one very abruptly. This is typical of many sports books; I guess you cannot expect the writing to be Hemingway-like. The other observation (it's not really a complaint, as there's no way around it) is that Said in Stone, because it is a single volume and because Steve Stone knows so much about baseball, only skims the surface of Steve's knowledge about the game.

That said, I would definitely recommend Said in Stone: Your Game, My Way to readers who know and respect Steve Stone, or anyone who wants to become acquainted with more of the subtleties of the game of baseball.