I don't think you can go wrong reading either the O. Henry or the Best American short story anthologies; I read both each year. It's somewhat surprising that they are not more popular, since they expose the reader to a wide variety of the best writers and writings, and since short stories can be easily fit into the busiest of lifestyles, especially plane and train rides.

Each anthology attempts to identify the best 20 short stories of the year, but together they prove just how subjective this quest ends up being. This year, 2003, there is only one story that appears in both volumes, Anthony Doerr's "The Shell Collector". Thus, the views and biases of the editors end up determining the final selection - and in fact, this is one of the selling points of the Best American series, which features a different guest editor (a well-known author) each year. The O. Henry volume can rightfully claim to have a more consistent selection process, which produces more uniformity year to year. 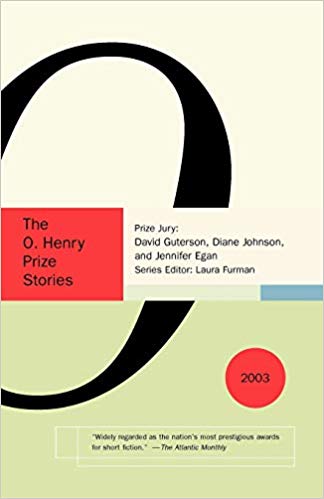 2003 is the first year that Laura Furman (an author and professor at the UT at Austin - where does she find the time to read all these stories?) is editing the O. Henry series. What are her biases? She is kind enough to state them: she favors stories whose emotional impact is "revealed...by stress or loss, the twin capitals of the short story's dominion. The peace of daily life, even the dullness of it, is what is decimated in the short story and replaced by the nightmares or sometimes the consolation of understanding another's existence or our own." With this as a prelude, don't expect any light-hearted love stories or comedies of manners.

Each of the twenty selections concerns itself with dark subject matter (death in many forms, alcoholism, doomed love affairs, to name a few), yet I did not find the overall effect to be depressing. Rather, I think Furman has succeeded in her mission - these stories do teach the reader about humanity and what it means to be human. My favorite was the aforementioned "The Shell Collector", which is a classically structured short story with easily deciphered symbolism and meaning. Denis Johnson's "Train Dreams", which two of the three prize jurists picked as their favorite (Furman did not want to cite any one story of the 20 as being the overall best), is a fantastic portrait of how the pioneer lifestyle has been affected by modern day inventions and society. I felt these two stories stood above the rest, but I also enjoyed "The American Embassy" (which reminds us how America is viewed by people in many oppressed nations), "Lush", and "Bleed Blue in Indonesia".

Everyone who reads this collection will have his/her own favorites. As the editors of the O. Henry and Best American short story series prove, it is impossible not to bring one's own biases to the subjective process of reading and experiencing a story. Enjoy!