tl;dr: A generous serving of brain food: well-written essays on a wide variety of subjects...

Christopher Hitchens performed admirably as guest editor of The Best American Essays 2010 by selecting twenty-one uniformly strong essays on their merits as pieces of writing, rather than on their subject matter or political viewpoints, as happens in some years of this series. If there is a bias at all in Hitchens' selections, it may be towards essays about authors and literature: Leo Tolstoy, John Updike and William F. Buckley are the subject of essays (although Buckley was much more than an author), and there are essays about the challenges writers face when they speak and an essay writer's experiences having lunch with four famous older authors. But there are also essays about Albert Einstein, former Washington D.C. mayor Marion Barry, Brooklyn, Gettysburg, Central Asia, and several personal experience essays about a nurse pronouncing patients dead, living with chronic severe vertigo, riding Amtrak and hanging out in the bar car, and having one's genes analyzed. All in all it is a diverse collection, without a clunker in the group, that will educate the reader about a variety of topics while showcasing writing that is well worth emulating. 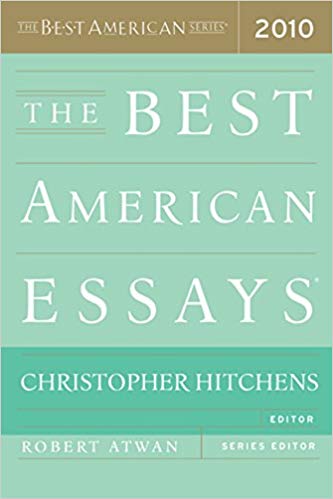 The three essays that impressed me the most were:

-- Steven L. Isenberg's "Lunching on Olympus": Isenberg describes his brief encounters over lunch with four English authors that he admired. Although the events of the lunches themselves are trivial, the power of the essay is in what Isenberg conveys about hero worship, which affects everyone, from a kid idolizing a sports star to an intellectual looking up to his predecessors.

-- Matt Labash's "A Rake's Progress": Labash's bio says that Esquire has called him "one of the absolute greatest magazine writers in America", and after reading this profile of Marion Barry, I believe it. It's extremely well written, interesting and insightful - it's too bad all magazine articles aren't this good.

-- Ian McEwan's "On John Updike": John Updike is one of the biggest figures in American literature in the past fifty years, and McEwan manages to convey why in a very small number of words - this essay is a model for communicating a strong message in a concentrated form.

The quality level of the essays was pretty uniformly high. The three I enjoyed less than others were Toni Bentley's "The Bad Lion", which didn't strike me with any emotional power, the way that the author intended; and S. Frederick Starr's "Rediscovering Central Asia" and James Wood's "A Fine Rage", both of which presented so much detail about their subject matter that I felt a bit lost reading them and couldn't judge whether the arguments they were making were correct or not.

I often refer to this series as "brain food", since reading well-written essays will educate and stimulate your brain. I can wholeheartedly recommend The Best American Essays 2010 as a sizable portion of tasty brain food.