tl;dr: Fulfilling, but be forewarned that this thin volume is heavy on essays on writing...

Guest editor Mary Oliver has put her indelible stamp upon this year's volume of The Best American Essays. It is so noticeable that it can be seen simply by shelving the book next to previous year's volumes, whose bindings all are roughly twice as thick. As a poet, Mary Oliver obviously prefers short pieces of prose in which the author has carefully chosen each word for maximum impact. Often very short essays are overlooked by this series, but this year's volume contains several of them, and few long works.

The other obvious imprint of Mary Oliver's is a preponderance of essays about either essays in specific or the act of writing in general. Some readers looking for a breadth of human experience in a volume of essays may consider this to be a bit too much authorial navel gazing. One such essay, Chris Arthur's "(En)trance", which takes as its titular subject the pillars on his mother's family farm estate, I found to be somewhat tedious and too self-centered, but after plowing through that one (it happens to be the first selection in the volume), many gems await the reader, including: 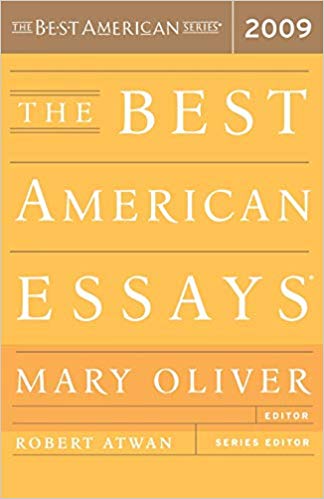 -- John Updike's "The Writer in Winter", one of his last published pieces, which accurately describes the trajectory and different challenges facing a writer over the course of his career and fame, written in perfectly erudite Updike style.

-- Brian Doyle's "The Greatest Nature Essay Ever", which truly is; no need to say more.

-- John Berger's "Portrait of a Masked Man", a fawning, highly sympathetic portrait of a Mexican Zapatista revolutionary, which unabashedly uses the power of the written word to shape and sway public opinion.

-- Kathryn Miles's "Dog Is Our Copilot", an informative essay about biology, evolution and Charles Darwin's affinity for his terrier that illustrates the special bond between humans and dogs, and how it has shaped each of the species.

While I would cite these four as being the best, I enjoyed most of the others, and felt that I learned something from each. Besides Chris Arthur's essay, the only other essay which I didn't care for was Richard Rogriguez's "The God of the Desert", which I found to be too abstract and disjointed to make much sense of - there is indeed a strong point he is making about the impact of geography on religion, but he goes about making that point in a very convoluted way.

All in all I do recommend the 2009 volume of The Best American Essays. If you happen to be physically holding the book and weighing it, both literally and figuratively, wondering whether to purchase it, I can assure you that, even though it is thin, you will get your money's worth.