tl;dr: A return to normalcy: a merit-based selection of the year's best essays...

Wow - I am stunned to see that the first five reviewers gave this volume only two stars, whereas I am awarding it five. Last year it was just the opposite: the most popular rating applied to the volume edited by the late David Foster Wallace was five stars, whereas I gave it two. I think this is more than coincidence. Last year's volume was heavy on grim politically charged essays, whereas this year's volume is void of politics and instead features essays on topics such as cameras, a road race, and dinosaurs. Guest editor Adam Gopnik no doubt has political viewpoints, but he took his job much more seriously than David Foster Wallace, and selected essays on the basis of their merits as work of literature. But this is just my opinion; perhaps all this proves is that, in art and literature, quality truly is subjective. 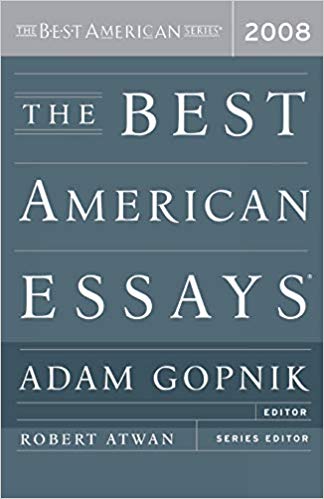 Here are quick takes on the essays that I enjoyed the most:

-- Jonathan Lethem's "The Ecstasy of Influence: A Plagiarism": an incredibly well-researched essay exploring the nature of originality in thought, plagiarism, and the way all creative thinkers build upon the works of others; it works on two levels, because Lethem himself openly steals almost all the thoughts in the essay from other sources (which are attributed), thus illustrating his main point.

-- Patricia Brieschke's "Cracking Open": a touching first person essay about the challenges a poor young mother goes through after giving bearing a child with a serious birth defect.

-- Bernard Cooper's "The Constant Gardener": another very touching first person essay, about a man tending to his sick partner and dealing with the physical and emotional issues of a terminal illness.

There was just one complete miss in this volume, Jamal Mahjoub's "Salamanca", which didn't register any impression on me other than having taken up space in the book and my time in reading it. There were a few other essays that caused me to question their inclusion, but on balance, I found 2008's volume to be a return to the normal standards of this series, and a serious attempt by Adam Gopnik to assemble the year's best essays.