tl;dr: Flawed collection does not represent the best essays of the year...

I normally thoroughly enjoy the annual volume of The Best American Essays series. This year, however, guest editor David Foster Wallace (he correctly calls himself "the Decider", since he makes the final decision as to which essays are included) does not choose the 25 or so best American essays. Instead, he chooses two essays with major flaws, and devotes far too high a percentage of the available pages to essays which expound the far-left "blame America first" viewpoint of the Iraq war. 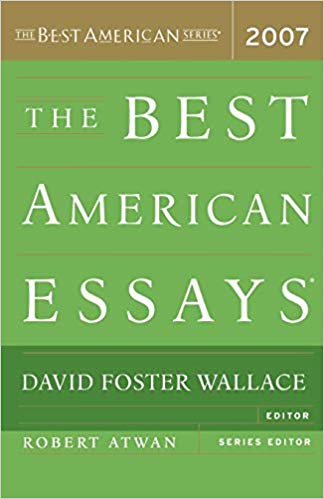 The most flawed essay is one of those anti-Bush, anti-U.S. military diatribes, Elaine Scarry's "Rules of Engagement". Scarry first excuses all violations of international laws by terrorists fighting the U.S. (such as flying civilian-loaded hijacked planes into civilian office buildings) by blaming the U.S.'s overwhelming military power for forcing the terrorists to use non-conventional means to attack us. She then applies old international laws which apply to conventional warfare to the U.S.'s anti-terrorist activities, demonstrating nothing more than the fact that these laws are hopelessly outdated and new laws are needed for fighting terrorists who hide among civilian populations and use non-traditional weapons. She at times descends into hysterics, as when she states that, because the U.S. military does things which (perhaps) a majority of the U.S. population does not agree with, they are guilty of flying a false flag (the U.S. flag). She goes far off the deep end when she confesses her fear that President Bush (not the terrorists or Iran) would use nuclear weapons. With the benefit of hindsight (I am writing this days before Bush leaves office) this fear of Scarry's has been proven misguided, but I feel it was also terribly misguided when she wrote it in 2006. The only thing this essay proves is that there is a very good reason why we don't entrust Harvard professors to defend our country, as we're much better off leaving that important responsibility to the Marines and other branches of the military.

The other highly flawed essay is David Greif's "Afternoon of the Sex Children". This is Greif's second appearance in The Best American Essays series; I found his 2005 contribution entitled "Against Exercise" to be equally flawed and infuriating. Greif has a highly trained intellect, but he is a prime example of someone who can use eloquent words to twist logic to support his own pretty bizarre views of the world, which he is anxious to get the rest of us to adopt. Unlike "Against Exercise", in which he states in the title the behavioral modification he wants the rest of us to adopt, in "Afternoon of the Sex Children" he waits until the very end, when he tries to rally his followers to prefer a "sophisticated and depraved sexuality" of old people, with "wrinkles" and "prolific flesh" (which was no doubt achieved by following the advice in his 2005 essay). Greif can put words to paper with the best of them, which is almost certainly why his essays keep finding their way into The Best American Essays volumes, but eloquence is not to be confused with truth.

So, which essays did I enjoy? Louis Menand's "Name That Tone" packed several interesting observations on life and aging into just a few pages; Marione Ingram's "Operation Gomorrah" is a harrowing picture of what a child experienced during a World War II firebombing of a city in Germany; and Cynthia Ozick's "Out From Xanadu" describes the transformation of her thinking and views on life as she matures. Unfortunately, David Foster Wallace does not include enough of these fine examples of the craft of the essay.