One would expect that a collection of essays that aspires to contain America's best would be like an abstract mosaic: a grouping of differently colored and sized pieces with no easily discernible overall theme, just very subtle ones related to the quality of the art and whatever happens to be prominent in the national consciousness that year. Some of the pieces would be dark, some would be brightly colored; some jagged, others smooth.

The format of The Best American series is to have a guest editor (in this case Lauren Slater, author of Prozac Diary) make the final choice for the pieces included in each volume. The guest editor thus has considerable power to shape the volume to their liking. A few guest editors (I've read this series for years) appear to aspire to uphold the series claim to be a collection of the best of that year's writing. More often, as is the case with Slater's selections here, the guest editor appears to put their strong personal stamp on the volume, selecting works that appeal to the guest editor's particular biases, which might be biases of subject matter, theme, tone, or (less often, thankfully) politics. 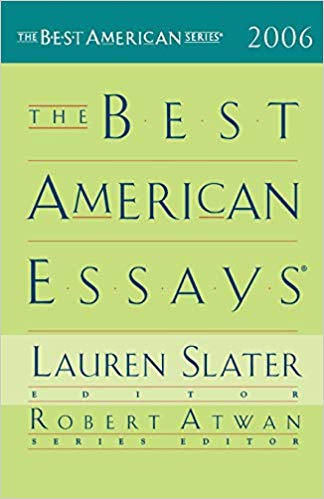 The essays Slater selected are nearly all well-written, powerful, and moving. However, they are almost entirely dark in tone, and their subject matter often focuses on personal tragedies that have happened to the authors. Here are some opening sentences (or near opening sentences) to provide a flavor of what the reader of this volume must consume: "Outside of a psychotic who attacked me a few months ago...", "I don't seem to suffer the pains of anguish that many women whose mothers have died feel...", "When our five-year-old daughter Olivia's goldfish, Blueie, died the other week...", "I woke to a downpour the March morning in 1989 when I had to identify my mother's body at the New York City morgue...", "It was the beginning of what would turn out to be a very bad day...", "This summer I had to put my dog George to sleep...", "Even during the last nine months of her life...", "In 1989, however, Pat's husband died suddenly of a heart attack...", "The dog that mauled me...", "In the elevator going down from the seventeenth floor, everyone is crying...", "The beast first showed its face benignly...".

I almost gave this volume five stars for the quality of the essays, but I decided to deduct a star due to the dark tone of nearly all the selections. What other essays, more positive in tone and outlook, were available to Slater but didn't make it into this volume?