Last year's The Best American Essays collection was edited by renowned (now, deceased) biologist Steven Jay Gould. Anne Fadiman, the editor for this year's collection, is by profession an essay editor, and the positive results show in this collection. Fadiman has chosen 24 essays whose common attribute is, as she states, that they are "crammed...the essays in this book... have no extra air. They're all Haagen-Dazs," for the brain, I might add.

My favorite was also Fadiman's, Andre Aciman's "Lavender", which just might revitalize the personal fragrance industry if it becomes read widely enough. Other highlights, in my opinion, were Atul Gawande's "The Learning Curve", a firsthand account of how medical professionals learn through trial and error (and the impact on society which this unavoidable fact causes), Francis Stufford's "The Habit", about growing up as a bookworm, and "Home Alone", in which Caitlin Flanagan skewers Christopher Byron's biography of Martha Stewart (she provides all the evidence needed to back up her arguments, so this is a successful, highly entertaining, vicious intellectual attack from one writer to another). However, I found all the other essays save one to be almost equally as memorable and powerful. 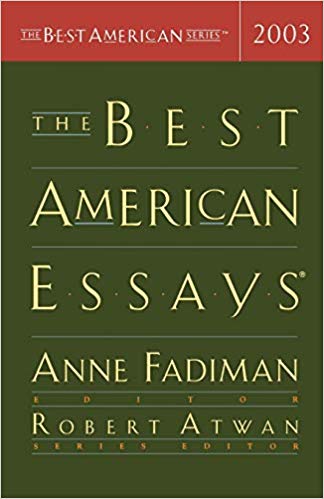 Just one of the 24 essays is fatally, logically flawed, Elaine Scarry's "Citizenship in Emergency". I'm surprised Fadiman chose it, since it clearly violates her prescription that "monumentality can be catastrophic" in an essay. Scarry uses selective evidence from the events of 9/11 to expound upon her obviously deeply held belief that the defense of the U.S. should be returned in some manner to the citizenry (she doesn't say exactly how, other than to cite the founding fathers' reliance on citizen militias). She launches into the typical left-wing tirade against the Bush administration and the war on terrorism, and even states that the fact that the U.S. possesses nuclear weapons means we are a monarchy, not a democracy. This ignores the fact that we elect our Commander in Chief every four years, and that there was a vote of the people's representatives (i.e. Congress) authorizing the Commander in Chief to invade Iraq. To construct her initial argument in favor of citizenry-led self-defense, Scarry brushes aside the fact that the passengers on the flight that crashed into the Pentagon had almost as much time and opportunity to figure out a way to stop the hijackers as did the passengers of United flight 93, and ignores the strong likelihood that the military, which by the time United flight 93 crashed had figured out what was going on that day, would have brought down the flight if the passengers had not (this is not to take anything away from the passengers of United flight 93, who pulled off one of the most heroic acts in recent American history). Furthermore, 9/11 represented not only a failure of the military to protect the Pentagon after the planes were hijacked, but equally prominently a failure of the U.S.'s non-military airline security system. Would Scarry propose that we American citizens invoke our 2nd Amendment right to bear arms on flights to solve this problem as well?

The other overtly political essay, John Edgar Wideman's "Whose War", which argues that U.S. was wrong to overthrow the Taliban after 9/11 and instead should have negotiated with Osama bin Laden (to quote Wideman: "by speaking to one another we might formulate appropriate responses, even to the unthinkable"), is perfectly counterbalanced by Francine du Plessix Gray's "The Debacle", which shows firsthand what the French policy of appeasement towards (and military underestimation of) Hitler led to: a mass exodus and four years of Nazi occupation of France that was only reversed when the U.S.- and U.K.-led Allies landed at Normandy.

Aside from the issues cited with the two most political essays, this collection is smart, entertaining, thought provoking, well written, and diverse in its subject matter, exactly as one would hope from an essay anthology.