tl;dr: How the great telecom bubble grew and finally burst...

It was the best of times (money flowed like water), it was the worst of times (in retrospect, for those who didn't cash out at or near the top). It was a great human drama, and unlike Dickens, it was all 100% nonfiction - it really did happen. For anyone in the telecom industry who lived through the bubble, and now the depression, for anyone who invested in the telecom bubble, or for anyone curious about one of the greatest financial manias in human history, I recommend Broadbandits.

Broadbandits profiles most of the key individuals and companies who helped inflate (and in many cases profit from) the telecom bubble, at a steady one company per chapter pace. Being in the telecom industry myself (still), I can state that Malik accurately captured the major stories I already knew, so I assume the rest of the book is generally factual. Although Malik focuses most of his anger on company bigwigs, he also admits that a bubble the size of this one could not have been created without active, willing participation from all sectors of the community: greedy disconnected CEOs, conflicted Wall Street and industry analysts, small investors who wanted to double their money overnight, and a unique confluence of regulatory and technological changes and advances. 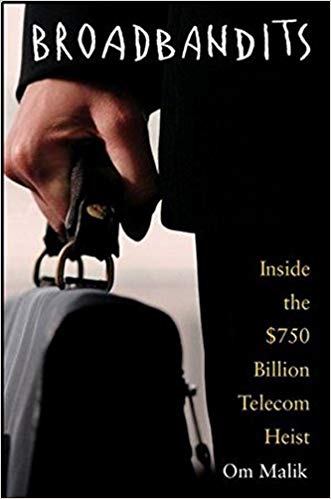 Broadbandits could have been better. Malik's principle sources are business press articles, and he has a fascination with documenting dollar figures, so he doesn't probe as deeply as he could into the reasons behind the actions he reports. The book was written hurriedly (to keep it topical), and there are more than a few data errors. Malik correctly cites Ravi Suria's seminal report on the debt and finances of telecom firms, which proved how the emperor of telecom stocks had no clothes (I remember almost crying for joy when I originally read Suria's report), but he missed Jeremy Siegel's equally important bubble bursting op-ed piece in The Wall Street Journal proving that Cisco and other high P/E stocks were way overvalued and that we were experiencing another "Nifty Fifty" tech mania episode. Finally, to return to my Dickens reference, the book would be even more dramatic if it recounted more anecdotal stories and statistics of the small investors and employees who lost their money, retirement savings and jobs, to provide contrast to the well-documented stories of folks who cleared many millions during the boom. However, I do admit that with the title of Broadbandits, the focus is on the bigwigs who inflated and profited from the bubble.

One more minor quibble: two of the people who praise Broadbandits on the back cover are thanked by Malik in his Acknowledgements. Conflicts of interest are everywhere! And just what did Malik do during his brief stint as a venture capitalist?