tl;dr: Diverse collection rates well, but not the best vintage of recent years...

I have to give The Best American Short Stories 2011 guest editor Geraldine Brooks credit: she chose a diverse selection of stories for inclusion in this year's volume. Unlike some guest editors who bias their selections according to their own standards or whims, Geraldine Brooks chose stories from a variety of styles, genres, settings, moods and scopes. As a result there really aren't any interconnections between the stories, and when you finish one and start another, you are well advised to recite the old Monty Python segue: "And now time for something completely different".

This leads me to believe that she has indeed assembled a sampler that is somewhat representative of the state of the American short story in the year 2011. However the overall quality level of the stories, while mostly strong, was harmed by a few duds. 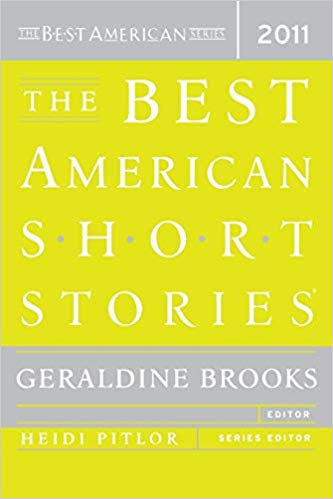 That said, I did have my favorites, which were:

--Richard Powers' "To the Measures Fall", which illustrates how subjective our appreciation of literature (and all art) is, and how it evolves over time based on our own life's stages and changes in society. This story is the most likely one in this volume to become a classic.

--Rebecca Makkai's "Peter Torrelli, Falling Apart", a touching and at times humorous story, set among the Chicago arts scene, about an actor who suddenly loses his acting ability and his friend who gives him another chance. The story does a wonderful job of portraying an extreme case of a fear that most people have, to some degree, of someday just losing "it".

--Jennifer Egan's "Out of Body", a gripping coming-of-age story set among the urban college set and the various social challenges and distractions they face. This story more than any other in the book keeps the reader on edge until the very last word.

--Steven Millhauser's "Phantoms", a story about a town inhabited by phantoms that illustrates the many ways, both bad and good, that people treat folks who are strange or different than them.

Two stories which I absolutely couldn't understand why they were chosen were: Tom Bissell's "A Bridge Under Water", which has a completely unappealing, pretentious, self-centered main character; and Ehud Havazelet's "Gurov in Manhattan", which was thankfully short but lacking in any lessons or observations I could relate to in my world.

The Best American Short Stories 2011 is worth reading if you are, like me, a fan of short stories. I also recommend short story anthologies in general as a great way to quickly expose yourself to the talents of a good number of other authors. Then, if you find a story and author you like, you can probably find more good works to read.