tl;dr: One of the best of the recent vintages...

Alice Sebold and Heidi Pitlor are to be commended for assembling an excellent collection of stories from a wide variety of different themes, styles, viewpoints, subjects, tones and genres. Often the guest editor will make a strong imprint on the collection by choosing a particular type of short story. Sebold and Pitlor appear to have taken their job very seriously this year, and have put together a volume worthy of the moniker "Best American Short Stories".

There is one story which rises far above the others, due to the writer's craftsmanship: Richard Powers' "Modulation". Powers mixes together a variety of dissimilar characters scattered around the globe and ties them all together with a science fiction storyline that conveys the power and importance of music in the present day. Powers has excellent command of the English language and keen observational skills, and it is hard to imagine how this story could be any better than it is. 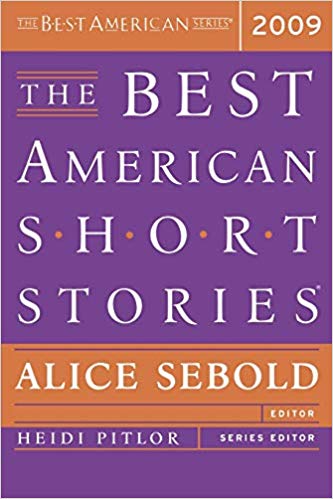 Other stories that I enjoyed include:

-- "The Idiot President", by Daniel Alarcon: No, this is not a diatribe against George Bush. Rather, it is a gripping portrait of the performing arts scene in a second world country, and the struggles that actors and audience members endure for the sake of the performance. The tale-within-the-tale, or more accurately the play-within-the-story, is also engaging and features a nice plot twist and moral at the end.

-- "Beyond the Pale", by Joseph Epstein: besides being an interesting character study of the younger immigrant wife of a Yiddish author, it also illustrates how renowned artists often are famous because of the right set of circumstances, especially having the right members of an audience, and how there can be similarly skilled artists whose work fades into obscurity because of a single shortcoming in conveying the artistic work to the audience, not in the artistic work itself.

-- "NowTrends", by Karl Taro Greenfield: A lesson in how China's rapid modernization and adaption of capitalism while still within the constraints of an officially communistic or socialistic system has produced dramatic effects on (and much uncertainty about) the lives, morals and behaviors of Chinese citizens.

-- "Sagittaruius", by Greg Hrbek: a story about the process a father undergoes while learning to accept and love his less-than-perfect child. While few children will have the defect that the subject of this story does, all parents should be able to relate to the lesson in this story, as no child (or parent) is perfect.

It is hard to limit myself to just citing these stories; "Modulation" stands alone as the best story in the book, but once past that one, the other stories (with just two exceptions) were all very good. The only two stories I felt should have been omitted were Namwali Serpell's "Muzungu" and Kevin Moffett's "One Dog Year", both of which I didn't think had coherent or interesting plotlines.

The Best American Short Stories 2009 is definitely worth reading if you are a fan of the short story form. If you are not yet a fan, I can recommend the 2009 volume as being one of the best of the recent vintages, and a worthy entrée into the world of the short story.