tl;dr: A collection of very good short stories, but no gems...

As always, I recommend both the Best American and O. Henry Prize short story anthologies as being great ways to become exposed to a wide variety of different authors and top-notch writing. For 2008, I would cite the O. Henry Prize Stories anthology as being the stronger of the two, because it features more truly memorable stories. But, for those with the desire to tackle two volumes of vintage 2008 short stories, I can also recommend The Best American Short Stories 2008. 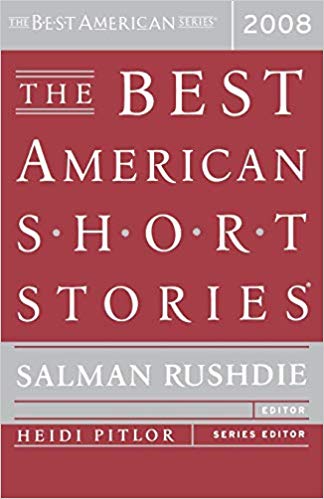 Usually when reviewing anthologies, I will cite my favorite stories and state why I especially liked them. However, for The Best American Short Stories 2008 I was unable to do so, because no stories stood out as being especially good. I found the quality level to be uniformly high, but with no truly superb stories. The only story that caused me to question its appearance in this volume was Tobias Wolff's "Bible", which I found to be pretty mundane and perhaps guilty of stereotyping recent immigrants to America. Usually I question the appearance of the de rigueur Alice Munro story, because seemingly every short story anthology always includes a Munro story, which I typically find to be predictable in terms of setting, subject matter and writing style. The Munro story included in this volume, "Child's Play", does indeed have a predictable plot (in stark contrast to the short story style pioneered by O. Henry), but it did hold my interest more than the typical Munro story.

Salman Rushdie's introductory essay is quickly read and forgotten. Often the stories selected by the guest editor of the Best American Short Stories series will tend to reflect that editor's views. If I had to cite a general characteristic of the stories Rushdie selected, it would be that many are prurient in nature. Whether this does in fact indicate something about Rushdie's mindset is subject to conjecture.