Dave Eggers very openly describes the process by which he leads the team of Bay Area young adults in choosing the pieces included in the "Best American Nonrequired Reading" series, and sure enough, bios are provided of the selection committee, and they do indeed all hail from the Bay Area. Still, it was surprising to me just how San Francisco-centric and youth-centric this collection is. As one strays farther from those two epicenters, in space or time, one is less likely to find this collection appealing or satisfying.

San Francisco youth culture can be somewhat nihilistic, and a number of the selections embrace themes of death and failed institutions, and offer a pessimistic outlook on life. This viewpoint is explicitly described in the first long piece in the book, Jonathan Ames' "American Gothic", an article about goth culture, but it is prevalent in a good number of other selections. Scott Carrier's "Rock the Junta", an article about the most popular rock band in the authoritarian country of Myanmar, has the underlying assumption that rock and roll music can change the world and bring about revolution, a viewpoint that is more popular among youths than history professors. There is even an article about Barry Bonds, Lee Klein's "All Aboard the Bloated Boat", that favorably compares Bonds and other steroid-ingesting athletes to musicians like Jimi Hendrix who took drugs and then produced classics of rock music. This article didn't at all change my opinion of Bonds, but it did make it clear again why Bonds finished his career in front of adoring fans in the city of San Francisco, which is much more tolerant of drug experimentation than other major league baseball cities. 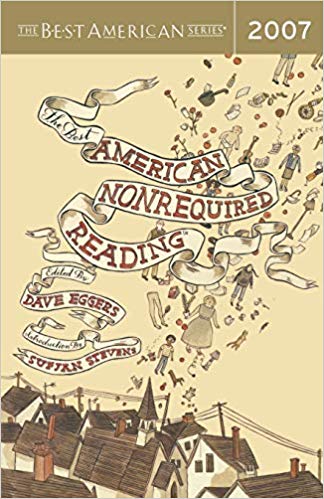 There are several very enjoyable pieces in this book, starting with Sufjan Stevens' introduction, in which he describes how he transitioned from being a non-reading third grader in a Waldorf school, with hippie-esque parents, to the harsh reality of a traditional American public school, where (thanks to a teacher and American pop culture) he was able to catch up in his reading in a hurry.

Other pieces I enjoyed include:

-- The Edge Foundation's "What is Your Dangerous Idea", which asked that question of some distinguished scientists, and then collected their responses; some of them are quite thoughtful and provocative.

-- Jennifer Egan's "Selling the General", which, although a bit fantastical, nevertheless makes some very telling observations about our celebrity-laden culture.

-- Mike Richardson-Bryan's "Best American Names of Horses Expected to Have Undistinguished Careers", which is the funniest (albeit shortest) piece in the book.

But all in all, this volume is likely to be most appreciated by younger readers, especially those who call the Bay Area home.