In his introduction to The Best American Short Stories 2005, guest editor Michael Chabon promises that he will choose stories that are first and foremost entertaining, as he believes that entertainment has gotten short shrift in elite literary circles. With a few exceptions, which may just represent stories that didn't appeal to me but may to others, Chabon delivers. Additionally, he is to be commended for choosing stories from a wider variety of genres than previous volumes, including science fiction, fantasy/horror, war journalism, and pure literary experimentation.

The collection leads off with a story that makes Chabon's point about a how a story can be both entertaining and thought provoking: Tom Perrotta's "The Smile on Happy Chang's Face". It not only has a gripping plot that causes the reader to push through to the ending, but it also has several meaningful ideas to communicate about personal relationships, sport, and fair play. In that sense, I feel it is an excellent short story in the O. Henry tradition. 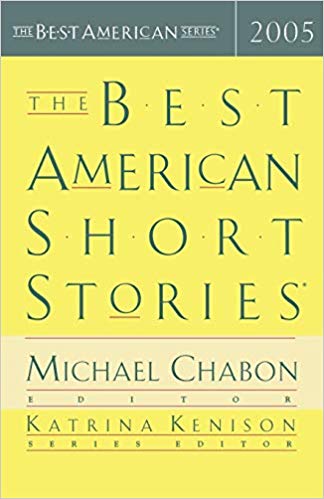 My favorite story in the book is the story that might be classified as science fiction, Cory Doctorow's "Anda's Game", although the events it describes are not very removed in time from the Information Age of today. The message in the story is an obvious one about the parallels between an imaginary on-line world and the real world, and how the problems in each get transferred into the other. It also asks (and answers) the question of whether it is best to live in an on-line world, where one is apparently not bound by the limitations of the physical world. Anyone who enjoyed "The Matrix" films would likely enjoy this story.

Two other stories that I especially enjoyed were Tim Pratt's "Hart and Boot", which never explains the apparently impossible events in the story, and yet which produces some very memorable images; and Nathaniel Bellows' "First Four Measures" which, although a bit dry, does present a riveting yet disturbing look at inter-generational longing. The two major duds, in my opinion, were David Means' "The Secret Goldfish" (the symbolism was too obvious, the message was too common); and Joy Williams' "The Girls" (the title characters were too annoying and undifferentiated, either from each other or from a stereotype).

If you are looking for a wide variety of short story fiction, with an emphasis on entertainment, then this volume of the Best American Short Stories has much to recommend it. I can't guarantee you create the same best/worst list as I did, but you will have a lot of variety to choose from.