First, let me state that I always recommend both the "Best American" and "O. Henry" annual short story anthologies to anyone with a modicum of interest in present-day American literature. By reading these volumes, you get exposed to a wide variety of some (but by no means all) of the best stories by some of our best writers (or at least those writers who produce in the short story format). A well-written short story is an easily consumed treat that also teaches something new about the human condition. Given the time constraints of modern-day life, it's surprising that short stories are not more popular. But certainly these anthologies deserve a wide audience.

I will also warn that, since interpreting works of art is subjective, others will have different reactions to the stories in this volume. My interpretation of the choices that Lorrie Moore made in putting this volume together was that she erred on the side of including instantly recognizable (but therefore not terribly innovative) stories by well-known authors, as well as including lengthier selections. Although the selections are made blind, without knowledge of the author's name, the pieces by Edward P. Jones, Alice Munro, Annie Proulx, John Updike, Mary Yukari Waters and John Edgar Wideman are all very recognizable via their subject matter and writing styles. Length, meanwhile, negates two of the main attributes of a good short story: brevity and pithiness. E.B. White, who always advocated using as few words as possible to communicate an idea, would not be pleased with all of Moore's selections. 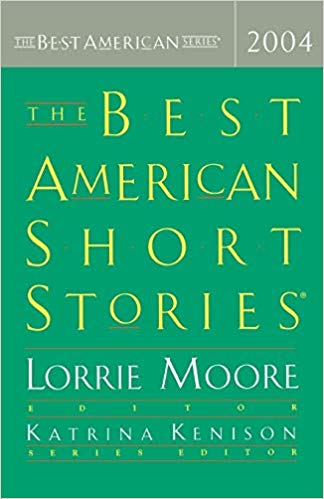 My favorite story in the 2004 volume is Thomas McGuane's "Gallatin Canyon", a true masterpiece of a short story written in the O. Henry style. Not a word is wasted, and every seemingly innocent or minor event quickly builds towards a life-or-death conclusion that exposes the nature of the main characters. It is a model for how to apply the classical short story form in the 21st century. The most innovative story is Stuart Dybek's "Breasts", which is truly (as Lorrie Moore so well characterizes) a Quentin Tarantino film transformed into short story format. However, like a Tarantino film, after all the violence has ended and the last joke has been played out, I find myself asking "yes, but what is the point?". Other notable stories, I felt, were T. Coraghessan Boyle's suspenseful modern day working-class romance "Tooth and Claw", and Edward P. Jones' "A Rich Man", which presents a view into the culture of inner-city Washington D.C. that has produced, among other things, the TV images of Mayor Marion Barry smoking a crack pipe.

My least favorite stories in this volume were Trudy Lewis's "Limestone Diner", which I felt was instantly forgettable, and, I'm sad to say, Annie Proulx's "What Kind of Furniture Would Jesus Pick?". Normally I really enjoy Ms. Proulx's work, but I felt that in this story she was just painting by the numbers, by invoking too many clichés: the Vietnam War as a conscious-raising event, the evil energy companies who are even more damaging to the environment than cattle-herding ranchers, and even a homosexual son who falls for the beefcake ranch hand.

All in all, the 2004 edition of the Best American Short Stories serves up a wide variety of different slices of present-day American life. While not the best volume in the series, it is well worth reading.