Wharton finance professor Jeremy Siegel is one of the most credible, most astute stock market analysts in the world. He is not a mindless stock cheerleader; in fact, his March 14, 2000 Wall Street Journal article entitled "Why Big Cap Tech Stocks Are a Sucker's Bet" persuasively pointed out how the high tech stock emperor had no clothes, and helped burst the insanely overvalued tech bubble. This was at a time when the vast majority of Wall Street analysts were inventing new valuation methods to justify insane stock prices, while other more pessimistic analysts had declared an "irrational exuberance" years before the market actually topped.

Stocks for the Long Run is Siegel's seminal work (now in its third edition), an excellent introduction to investing for the average investor looking to save for retirement. If the SEC were to choose one book to force people to read before they were allowed to invest their money in the stock market, this book would be it. In fact, the people who lost their retirement money because it was all invested in one stock such as Enron or Worldcom (or a bunch of dot-coms), or who lost a fortune day trading when the market tanked, would have been so much better off if they had just read this book and applied its lessons. They would be better off, the market would be much less volatile, the allocation of capital would be more efficient, the economy would be stronger, and the world would be a better place, if only more people would read this book. 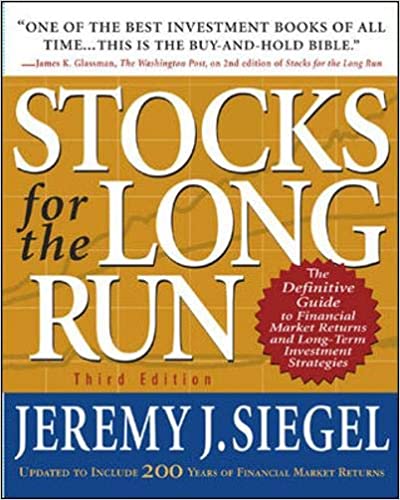 Stocks for the Long Run gives you all the knowledge you need to implement a solid investment strategy. Siegel educates and informs (this book will teach you all the basics you need to know to watch CNBC and to understand the market), and he packs his book with as much long-term data and supporting evidence as possible. He is a firm believer in the scientific method and data; he does not posit recommendations unless they are firmly supported by historical evidence.

The good news in the third edition (post 1990s/2000 bubble) is that the case for investing in stocks is still a strong one. Siegel presents extremely persuasive arguments why, long term, stocks hold their value and gain value better than any other type of investment (fundamentally, we must never lose sight of the fact that stocks are claims on real assets and the cash flows generated by enterprises). Surprisingly, stocks are lower risk, long-term, than bonds. Siegel presents some good arguments why stocks now deserve a higher-than-long-term-average P/E, but also shows how index investing (which he still heartily recommends) is distorting the market, and how our expectations for returns from stocks need to come down slightly. He correctly identifies TIPS as the best investment for those seeking short-term safety.

Siegel's main argument is that investors should get into stocks in such a way as to match the overall return of the market, which will provide them with a healthy long-term return on investment. He does show a number of ways to improve on that return and beat the market, such as by recognizing when the market is under and overvalued, thereby buying low and selling high. Thus, I would recommend that a new investor first read, study and apply Stocks for the Long Run, and then move on to Ben Stein's Yes, You Can Time the Market! as a way to optimize the lessons from Stocks for the Long Run.